Easdale Islan  is the smallest permanently inhabited island of the Inner Hebrides. It was once the centre of a thriving Scottish slate mining industry, and one of the disused quarries forms a perfect arena for the World Stone Skimming Championships.
The championships are held every year on the last Sunday in September. Anyone of any age and any level of skill can enter. Each competitor is allowed 3 skims using specially selected Easdale slate skimming stones.    For a skim to qualify the stone must bounce at least three times – it is then judged on the distance achieved before it sinks.

About The World Stone Skimming Championships 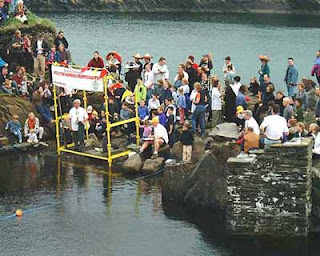 The World Stone Skimming Championships were started in 1983 by Albert Baker, and then lay fallow until they were resurrected in 1997 by the Eilean Eisdeal (The Easdale Island Community Development Group) as a fundraising event.
Contestants hail from around the world and the championships now attract over 300 participants and many spectators. Anyone of any age and any level of skill can enter the championships.
The competition is split into Ladies, Men, Junior Boys and Girls and Under 10s Boys and Girls categories. There is also the Old Tosser category for those entrants who have reached the experienced and veteran heights of no longer being in their 50s! Entrants to this section will throw at the same time as the other adults in the order in which they register. Be sure and mark your registration form if you wish to enter this category!
Team category. Team members register as individuals as normal but, in addition, name the team that they are taking part in. Teams must consist of four individuals, of either sex, but of the same age category. Their three throws count towards their individual entry AND the Team entry. 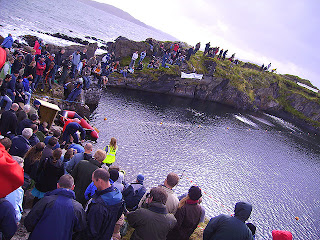 Official Rules of the World Stone Skimming Championships are:

The World Stone Skimming Cup is presented to the over-all winner, and the Sea-fari Salver for the best women’s skim and The Puffer Trophy for the winning team. There are also slate medals going to the best junior skim and 2nd and 3rd runner-up in each category. ‘The Bertie‘, named after the event’s founder, is presented to the Easdale Islander who skims the furthest. 2009 saw the launch of a new award, ‘The Old Tosser Walking Stick‘, for contestants over 60 with the longest skim.