Most people associate ‘tubs’ with showering, bathing, and even having hot sex. For the folks in Ito City, Japan, tubs are instead used to race down the banks of the Matsukawa River. Back during the early part of the 20th century, the residents of Ito City would line up alongside the Matukawa River and wash their clothes using small wooden tubs.

Sometime around the 1950s, they started using the tubs as boats, and then they eventually began racing down the river with them. The event was soon after, in 1955, officially designated as an annual race in the hopes that it would attract tourists.

54 years have passed and yet people continue to race annually, with over 200 participants — including men, women, children, and even ducks — having shown up in July for this year’s festivities. 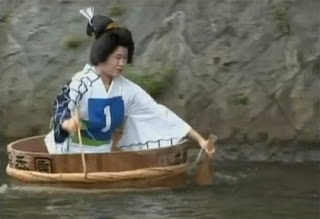 And you can’t just be some geek off the street to make it big at the Ito City race, which is divided into categories based on age, gender, and country. It takes some real skill to succeed at this daring venture, including the ability to keep your tub afloat, the strength to not topple off, and the endurance to out-paddle your competitors to the 400 meter finish line.

It helps too if you have as much team spirit as Hidekyuki Okamoto, who praised the experience as his teammates hollered, “PARTY!”