The ancient Celts had hundreds of deities, but as with most cultures, they had their demons as well. Some of the Celtic “monsters” were originally gods, but were later demonized as pagan creatures when many of the Celts became Christians. But the Celtic culture has always feared an array of evil forces.

IrishCentral has hunted down the 10 most frightening of these Celtic and Irish demons and monsters. 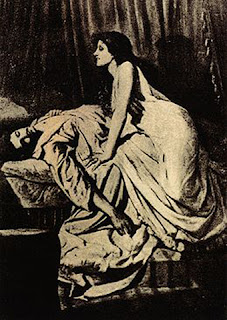 1. Dearg Due – The Irish Vampire

Yes, Dracula himself is an Irish creation (Irishman Bram Stoker created the modern image of the monster in his masterpiece novel), but there’s also a vampire that resides right smack in the middle of Ireland.
Dearg-due, an Irish name meaning “red blood sucker,” is a female demon that seduces men and then drains them of their blood.
According to the Celtic legend, an Irish woman who was known throughout the country for her beauty, fell in love with a local peasant, which was unacceptable to her father.
Dad forced her into an arranged marriage with a rich man who treated her terribly, and eventually she committed suicide.
She was buried near Strongbow’s Tree in Waterford, and one night, she rose from her grave to seek revenge on her father and husband, sucking their blood until they dropped dead.
Now known as Dearg-due, the vampire rises once a year, using her beauty to lure men to their deaths.
Not to worry, though – there is one way to defeat Dearg-due.
To prevent the undead from rising from the grave, simply build a pile of stones over her grave. No, it won’t kill her, but at least you’ll hold her off until next year! 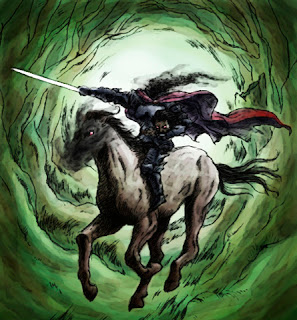 2. The Dullahan – the Irish Headless Horseman

Another legendary Irish monster is the Dullahan, a name that can be translated to “dark man.”

Often portrayed in contemporary fantasy fiction and video games, this foreteller of death is the Irish version of the headless horseman.

The Dullahan rides a headless black horse with flaming eyes, carrying his head under one arm. When he stops riding, a human dies.

Some versions of this legend say that the Dullahan throws buckets of blood at people he passes, while other say he simply calls out the name of the mortal that will soon die.

As with most evil forces, the Dullahan has a weakness – gold.

The creature is scared of the substance, so any lonely travelers this Halloween night would be wise to have some on him in case they have a run-in with this headless horror!

A famous Irish creature that some say teams up with the Dullahan is the Banshee.
One of the most recognizable Celtic creatures, having made a guest appearance in “Darby O’Gill and the Little People” and all, the Banshee is a female spirit whose wail, if heard outside of a house, foretells the death of one of its inhabitants.
Several versions of the Banshee legend say the feared ghost rode alongside the Dullahan in a black cart drawn by six black horses. The pair is said to whip the horses with a human spinal cord.
But most legends say the Banshee was terrifying enough on her own.
Descriptions of her appearance vary, from an ugly old hag to a beautiful young woman, but all agree that the creature’s blood curdling wail will be heard three times before someone dies. 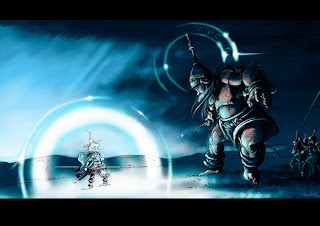 Balor is the demonic God of Death in Celtic mythology.
Sporting one eye and a single gigantic leg, the evil creature was King of the Fomori, demons who lived in the dark depths of lakes and seas.
Balor can kill someone just by staring at them with his evil eye, so he kept it closed most of the time, so as not to constantly be tripping over dead bodies.
The God of Death would provide his Fomori with victims, but the evil race was left to their own devices when Balor was killed by his son Lug, who shot him with a slingshot.
Now the Fomori have returned to their waters and transformed into sea monsters who prey on humans.
Perhaps it’d be a good idea to stay away from any bodies of water this Halloween! 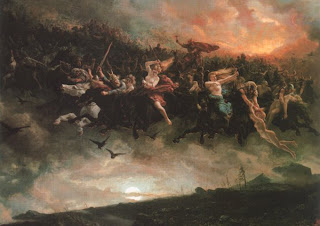 Though they’re not so much “demons,” Sluagh are scary creatures that hunt down souls.
According to Irish folklore, Sluagh are dead sinners that come back as malicious spirits.
These spirits come from the west, flying in groups like flocks of birds, and try to enter a house where someone is dying to take away that person’s soul.
Some Irish families would keep their west-facing windows shut at all times to keep the Sluagh out of their homes.
Some say the Sluagh is the Irish version of the Wild Hunt, a European folktale about ghostly hounds or spirits traveling around in packs foretelling of death and disaster.

Carman is the Celtic goddess of evil magic.
This destructive witch roamed around with her three evil sons: Dub (“darkness” in Irish), Dother (“evil”) and Dain (“violence”), destroying anything or anyone in their path.
Carman put a blight on Ireland’s crops and terrorized the Irish until the Tuatha De Danann, the “peoples of the goddess Danu,” used their magic to fight and defeat her, and drove her sons across the sea.
Guess this is one demon you can check off your list of scary creatures to worry about this Halloween. 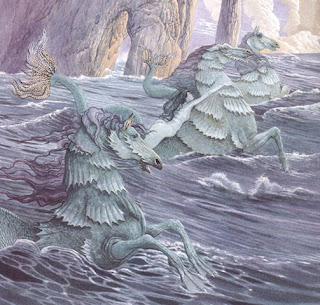 The kelpie is a monster right out of Celtic myth. The creature can take on multiple shapes, but usually it appears in the form of a horse.
The kelpie galloped around Ireland, looking like a lost pony, attempting to trick women and children into riding on it. But the strange thing about this pony is that its mane would always be dripping with water.
If a woman hopped on, the monster would then run into the water, drowning its victim, and then would take her to its lair to eat her.
The Irish demon would sometimes transform into a handsome man to lure women to its trap, but a telltale sign that it was a kelpie was if that “man” had kelp in its hair.
Ladies, take note – meet a guy with seaweed on his head on Halloween night, don’t go home with him!

Caorthannach, thought by some to be the devil’s mother, is a demon that was fought off by St. Patrick when he banished the snakes out of Ireland.
The saint is said to have stood on the mountain now known as Croagh Patrick and expelled all the serpents and demons out of the Emerald Isle into the sea to drown.
One monster, however, managed to escape – Caorthannach, the fire-spitter. The demon slid down a mountain away from the saint, but Patrick spotted her, and chased her down upon the fastest horse in Ireland, which was brought to him.
The pursuit was a long one, and Caorthannach knew St. Patrick would need water to quench his thirst along the way, so she spit fire as she fled, and poisoned every well she passed.
Though the saint was desperately thirsty, he refused to drink from the poisoned wells and prayed for guidance.
Patrick eventually made it to the Hawk’s Rock, where he waited for Caorthannach. As the demon approached, he jumped out from his hiding spot and banished her from Ireland with a single word.
The evil fire-spitter drowned in the ocean, leaving a swell behind that created the famous Hawk’s Well. 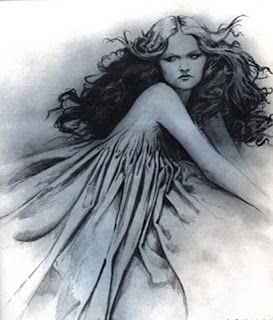 Both a muse and a demon, Leanan Sidhe is another one of Ireland’s mythological vampires.
The fairy was a beautiful woman who was said to give inspiration to poets and musicians – but at the price of their lives.
She would make the artist her lover, sharing with them her intelligence, creativity and magic, but when she left, the men would be so depressed, they’d die.
Leanan Sidhe would then take her dead lovers back to her lair.
Rather than directly suck the blood of her victims, Leanan Sidhe got creative, and collected their blood in a giant red cauldron, which was the source of her beauty and artistic inspiration.
As with Dearg-due, to prevent the undead Leanan Sidhe from rising, one must put a cairn of stones over her resting place.
A tip to artists: perhaps you should look elsewhere for inspiration, rather than risking falling into the evil hands of the Leanan Sidhe! 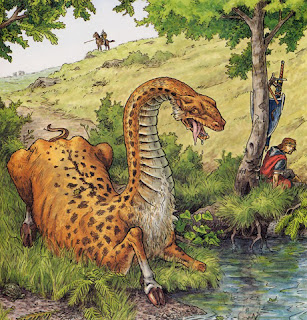 Another snake-like evil Celtic creature is the Questing Beast, a monster with the head of a snake, the body of a leopard, the backside of a lion and the hooves of a deer.
The beast’s constant cry was said to sound like the bark of 30 dogs.
The Questing Beast, known to be quick, was hunted down by many a knight, and in Celtic myth was chased by King Pellinore, an Arthurian character.
This beast appears not only in the legends of King Arhtur, but also in Edmund Spenser’s epic tale “The Faerie Queene,” which in part, tackles the troubled relationship between England and Ireland in the 16th century.
This is one scary creature you don’t have to worry about this Halloween – unless you dress up as a knight.