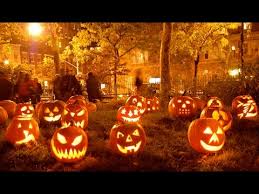 Halloween is just around the corner and with it comes loads of candy, movies, costumes, and fun! Because we already have a list of the top 10 horror movies, we thought it might be a nice idea to do a list of halloween movies that are suitable for all ages – something the kids and adults will both love. I have tried to pick a good balanced selection of movies – not just horror movies, but movies that contain halloween themes: witches, ghosts, and all things spooky. I have intentionally excluded movie series (such as the Harry Potter series) and Halloween versions of popular shows (such as the Spongebob Halloween special). If you haven’t seen any of these movies, you definitely should. Be sure to tell us what movies you will be watching this halloween! This list contains a competition – further details at the bottom of the list.

More than 300 years ago, 3 witches were sentenced to die in Salem, Massachusetts and a boy was turned into a cat (a black cat, naturally). Now it’s Halloween, and the witches (who fly on – I kid you not – vacuum cleaners) are back. This time, they’ve got their eyes on immortal life and have turned their wrath on trick-or-treaters and it’s up to the 300-year-old cat to save the day.

When an arranged marriage between Victor Van Dort and Victoria Everglot reaches the rehearsals, Victor starts to worry. Spending time alone in the forest, Victor decides to practice on his own. Everything seems to go well, until he accidentally puts the ring upon the hand of a corpse. Before he knows it, Victor is in the land of dead and now has a corpse bride. Whilst everyones worries about who Victoria will marry in the land of the living, Victor desperately finds a way to get back.

Furious that her late father only willed her his gloomy-looking mansion rather than his millions, Carrigan Crittenden (Moriarty) is ready to burn the place to the ground when she discovers a map to a treasure hidden in the house. But when she enters the rickety mansion to seek her claim, she is frightened away by a wicked wave of ghosts. Determined to get her hands on this hidden fortune, she hires afterlife therapist Dr. James Harvey (Pullman) to exorcise the ghosts from the mansion. Harvey and his daugh- ter Kat (Ricci) move in, and soon Kat meets Casper, the ghost of a young boy who’s “the friendliest ghost you know.”

In a land of monsters, James P. Sullivan is king. He and his coworker/ friend Mike Wazowski are two of many monsters that work for Monsters Inc. a utility company that generates power for a very paranoid and nervous city of monsters. This power, oddly enough, is generated from the screams of children, which is produced by scaring them in their sleep. One night, however, Sully uncovers a devious plot to rid Monster city of it’s power problems, but in all the wrong ways. Together, ironically, Sully and Mike will fight to protect the innocence of the children they scare every night.

A young boy, recently orphaned, is taken to England by his grandmother. At a hotel in which they are staying, a group of witches have gathered to prepare a plot to rid the world of all children. This movie is based on the wonderful book by Roald Dahl and stars Anjelica Huston and Rown Atkinson. This is a film that the kids will definitely love. This film was produced by Jim Henson.

In a small anywhere town in any state in America, two young boys- quiet Will Halloway and somewhat rebellious Jim Nightshade-enjoy the ever-shortening days of autumn. When the boys hear about a strange traveling carnival from a lightning rod salesman, they decide to see what it is all about-but Will is fearful, as most carnivals end their tours after Labor Day. When the ominous Mr. Dark, the Illustrated Man, rides into town on a dark midnight, setting up his massive carnival in a matter of seconds, the boys are both thrilled and terrified. A great film by Ray Bradbury.

Originally a television program, the Pufnstuf film was a real gem and has outlived the series. One of the best things about this film is that it stars Mama Cass (Cass Elliot) from the Mamas and the Papas, as Witch Hazel. The show and the film were both notable for bright colors, fast edits, sped-up film, musical segments and pop culture in-jokes, and appealed to young adults almost as much as children. Central to the film is young Jimmy and his magic flute, and a group of wicked witches who want to capture the flute for themselves. The series and movie are named after one other important character, a friendly dragon.

Jack Skellington, the pumpkin king of Halloween Town, is bored with doing the same thing every year for Halloween. One day he stumbles into Christmas Town, and is so taken with the idea of Christmas that he tries to get the resident bats, ghouls, and goblins of Halloween town to help him put on Christmas instead of Halloween — but alas, they can’t get it quite right.

After Barbara and Adam Maitland were killed in a car crash, they find themselves trapped as ghosts in their beautiful New England farmhouse. Their peace is disrupted when a yuppie family, the Deetzs, buy their house. The Maitlands are too nice and harmless as ghosts and all their efforts to scare the Deetzs away were unsuccessful. They eventually turn to another ghost ‘Beetlejuice’ for help…

Three odd-ball scientists get kicked out of their cushy positions at a university in New York City where they studied the occult. They decide to set up shop in an old firehouse and become Ghostbusters, trapping pesky ghosts, spirits, haunts, and poltergeists for money. They wise-crack their way through the city, and stumble upon a gateway to another dimension, one which will release untold evil upon the city. The Ghostbusters are called on to save the Big Apple. This film is a timeless cult classic.