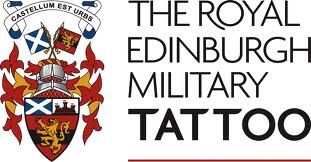 The commentator – the Voice of the Castle – brings the audience together, cheering individually for their countries but united in an international fraternity. The tunes are echoes of a glorious and often tragic past, of freedom and glory and of suffering and loss … ‘The Garb of Old Gaul’ and The Skye Boat Song’ and the rousing quick marches, ‘Dumbarton’s Drums’ and ‘All the Blue Bonnets are over the Border’.

The Royal Edinburgh Military Tattoo is the most spectacular show in the world, enjoyed by an international television audience of 100 million. There is, however, no substitute for being there in person as part of the 217,000-strong audience over its three-week season on the Esplanade of Edinburgh Castle who don’t simply watch the show but become a part of it. 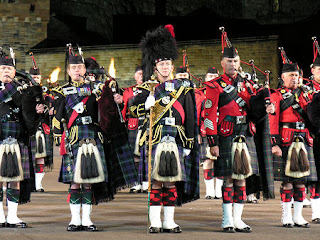 In the glowering twilight, Edinburgh Castle slumbers, resting, waiting for nightfall and for the footlights that will transform it into a dazzling stage set for the world’s most spectacular show. Down Castlehill, along the Lawnmarket, around the cathedral church of St Giles, through the closes of the Royal Mile and the narrow streets whose setts ring with history, people gather in the dusk of a late summer evening.

Turning their faces to the great castle rock, where ancient clans first settled the area, which was to become the capital of Scotland and where now stands Edinburgh’s mighty fortress, they join a crowd that will soon be an audience, rapt with enthusiasm for the unique spectacle that is the Royal Edinburgh Military Tattoo.

Climbing the final rise towards the Castle Esplanade, walking companionably together, eight and ten abreast, eager old hands who come every year but never lose the thrill of a Tattoo ahead, and new folk, many on holiday from other proud nations a world away, who are about to witness the show they will never forget… 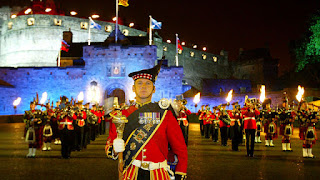 Settling into their seats, the fresh clear air exhilarating, the sky above the Castle deepening first to heather-colors of lilac and purple before darkness slips down and the floodlit castle draws all eyes.

A hush falls and darkness deepens, the great oak gates of the Castle sweep open and the swell of the pipes and drums cracks through the night sky. As the massed bands march out in their hundreds across the drawbridge, flanked by effigies of William Wallace and Robert The Bruce, emotions run high: this matchless spectacle unfailingly enthralls, symbolizing the Scotland that everyone holds dear in their heart.

Every Edinburgh Tattoo begins with this vivid and intensely emotional display, and may it always be so. For these are Scotland’s finest fighting men (pipers and drummers are soldiers first, musicians second) playing the stirring tunes that over centuries have given courage and inspiration on battlefields in every corner of the globe. Lest we forget, we have our pipes and drums.

Now a dazzling show is spread out on the Esplanade, a whirling and colorful kaleidoscope of music, dance and display. It may be exciting – daredevil motorcycles at speed and the breathtaking re-enactment of battles, or exotic – Turkish music and Chinese dancers, or simply the best of Scottish – Highland dancers wheeling and swirling to a fiddle orchestra.
Such is the blend of home and international talent that the show is always fresh, exciting and alive, even for the many faithful fans who ‘never miss’ a yearly visit to the Tattoo. Over some 60 years of the Tattoo they would have seen performers from more than 40 countries – from Australia to Canada, Africa to Fiji, France to Nepal, The Netherlands to the United States. 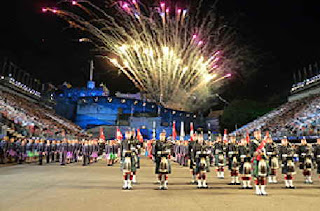 International guest performers bring another dimension to a familiar pageant but it is the pipes and drums, which serve as the emotional core, the heart of the Tattoo which Scots, love fiercely and visitors quickly take to their own hearts.
And above all else the awesome presence of the Castle, great flaring torches lighting its venerable walls and creating mysterious shadow plays on the honey colored stone.
Now, the audience gather themselves together for the finale. All 1000 or so performers are on the Esplanade, column after column of marchers, dancers, and bandsmen. The audience joins in the great chorus of singing and cheering, and applause and cries of ‘Bravo!’ before a hush falls for the singing of the Evening Hymn, the sounding of the Last Post and the lowering of the flags.
And finally, all eyes are drawn to the Castle ramparts, where a single spotlight cues the Lone Piper to play his haunting lament, the high notes echoing across the still night sky and across the dark city, as the flames of the Castle torch lights and the piper’s warming brazier flicker and slowly die. 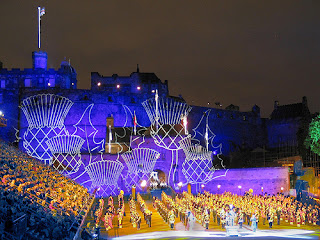 Fireworks burst out against the black sky, but the spell is not broken for when we sing ‘Auld Lang Syne’ and shake our neighbor’s hand, the emotions linger and the heart is full.
Tattoo-goers all, united by international friendship, the shared love of a nation, its music and its traditions.

‘Will ye no come back again’? says the haunting old song and our answer must be ‘oh, yes and very soon’. 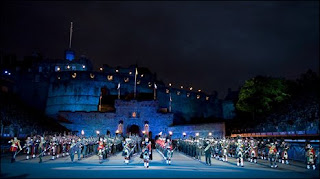 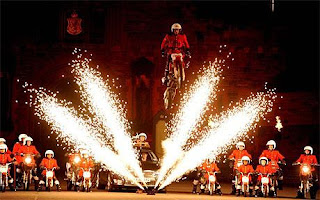 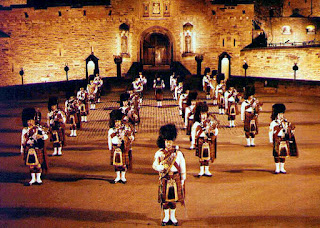 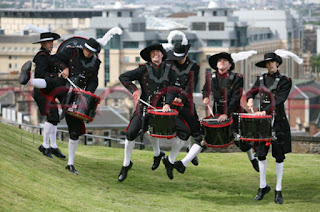 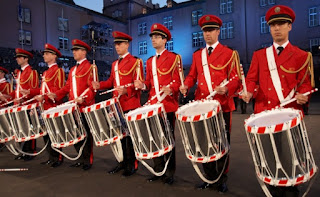