For communities like Killorglin to survive against the often overpowering commercial pressures imposed by their larger, urbanized neighbors it takes an inherent, deep seated tenacity. To say that the industrial and economic success of the town came about as a result of being ably represented politically, at the right time – is true – but only part of the overall picture. This train of thought displays an ignorance of how these market towns, strategically set down at cross-roads, not only survive against fierce odds but indeed thrive. A cursory glance at the history of any such town will reveal the growing pains and battle scars endured by generations to get us to where we are today. 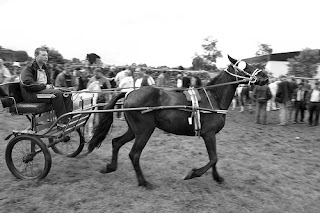 Rivers played a huge role in the establishment of trade centers and in Killorglin’s case the Laune with its link and proximity to the well sheltered Castlemaine Harbour must have presented a very attractive location to the first travellers – commercial or otherwise. Political historians will recall the late Timothy Chub O’Connor extolling the virtues of his native patch and he painted a picture with the kind of infectious    enthusiasm that industrialists found impossible to ignore. 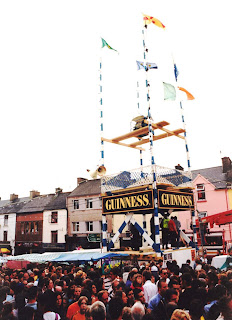 The vibrancy of the community is marked by the ever increasing list of events sprinkled throughout the year and the world famous Puck Fair has been added to by festivals like the ‘The Wild Flower of the Laune Vintage Harvest Festival’ and the recently revived Head of the River Regatta. The mammoth, annual undertaking that is the pantomime is yet another of the great logistical wonders so crucial to the survival of the spirit of community involvement.

The most widely mentioned story relating to the origin of King Puck, associates him with the English Ironside Leader Oliver Cromwell. It is related that while the “Roundheads” were pillaging the countryside around Shanara and Kilgobnet at the foot of the McGillycuddy Reeks, they routed a herd of goats grazing on the upland. The animals took flight before the raiders, and the he-goat or “Puck” broke away on his own and lost contact with the herd. While the others headed for the mountains he went 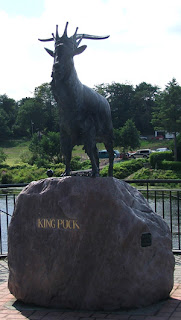 towards Cill Orglain (Killorglin) on the banks of the Laune. His arrival there in a state of semi exhaustion alerted the inhabitants of the approaching danger and they immediately set about protecting themselves and their stock.
It is said that in recognition of the service rendered by the goat, the people decided to institute a special festival in his honour and this festival has been held ever since.
Other legends regarding the origin of “King Puck” relates to the time of Daniel O’Connell, who in 1808 was an unknown barrister. It seems that before that year, the August fair held in Killorglin had been a toll fair, but an Act of the British Parliament empowered the Viceroy or Lord Lieutenant in Dublin to make an order, at his own discretion, making it unlawful to levy tolls at cattle, horse or sheep fairs. Tolls in 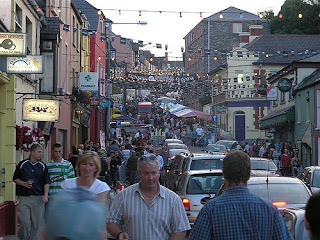 Killorglin at this time were collected by the local landlord – Mr Harman Blennerhassett – who had fallen into bad graces with the authorities in Dublin Castle and as a result the Viceroy robbed him of his right to levy tolls. Blennerhassett enlisted the services of the young Daniel O’Connell, who in an effort to reverse the decision decided that goats were not covered by the document and that the landlord would be legally entitled to hold a goat fair, and levy his tolls as usual. Thus the fair was promptly advertised as taking place on August 10th, 1808, and on that day a goat was hoisted on a stage to show to all attending that the fair was indeed a goat fair – thus Blennerhassett collected his toll money and Killorglin gained a King.
Whatever its origins, the fair has long been and continues to be the main social, economic and cultural event in the Killorglin Calendar. It is a time when old friends meet, when new friendships are forged and the cares of everyday living are put on hold. 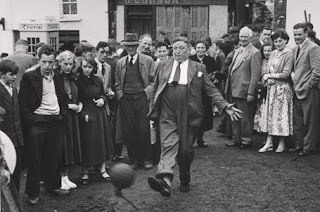 There are many legends which suggest an origin for the Fair, many of which are wildly inventive, but there is no written record stating when the Fair started. It can however be traced back to a charter from 1603 by King James I granting legal status to the existing fair in Killorglin.
It has been suggested that it is linked to pre-Christian celebrations of a fruitful harvest and that the male goat or “Puck” was a pagan symbol of fertility, like the pagan god Pan. 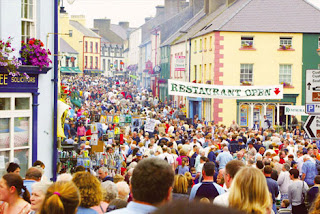 The origins of the fair have thus been lost in the midst of antiquity, and various commissions set up over the past two hundred years have tried in vain to date them. Evidence suggests that the fair existed long before written record of everyday occurrences were kept as there is one written reference from the 17th Century in existence which grants Jenkins Conway, the local landlord at the time, the right to collect a sum for every animal brought to the August Fair. This would suggest that the Fair was something already well established in the local community.