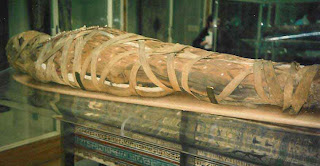 You might know what a mummy is, but do you know how they were turned into mummies? Here we will explore the process of mummification, the reasons behind it and the religious rites associated with it.
A mummy is the dried and embalmed body of a dead human being. The ancient Egyptians are the best known of the peoples who preserved the bodies of the dead. However, the practice has existed among many other groups throughout the world.  The natives of the Aleutian Islands removed the entrails from the body of a deceased individual of importance, carefully washed the body, dried it, wrapped it in furs, and suspended it in a sheltered cave. The Peruvian Indians prepared mummies, which were sometimes petitioned in religious rituals to grant food and long life. The Peruvians eviscerated each corpse, probably dried it thoroughly, then wrapped it in many yards of cloth. 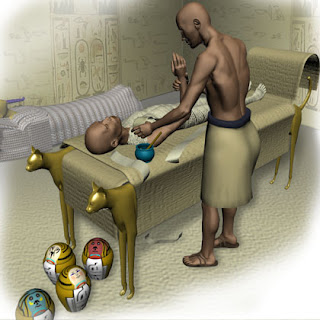 The Egyptians believed that everyone had a soul in the form of a bird with a human face. During life this soul resided in the belly or the heart, but after a person’s death it was freed. In the daytime the soul would fly wherever it wished, but at night it had to return to the tomb. In order to allow the soul to find the right tomb, the body of the deceased person had to be carefully preserved.
It took 70 days to mummify a dead person. The process was accompanied by religious rituals. The embalmers set up shop near the larger temples or pitched a tent near the home of the deceased. The first step was the removal of those parts of the body most difficult to preserve, such as the brain and organs. The rest of the body was treated with natron (which as it was found in Egypt consisted of washing soda mixed with baking soda), which, with the help of the Egyptian climate, dried the body. This done, the mummy was wrapped in linen. At least 20 layers of linen, several hundred square feet of cloth, were used. 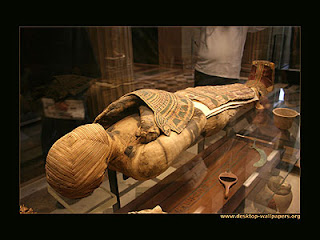 Meanwhile, numerous workers were engaged in constructing a tomb, preparing a coffin, and assembling all the articles to be buried with the mummy. Scribes wrote a magical text, the Book of the Dead, which gave the deceased informations on how to get to the afterworld. These texts were written on papyrus rolls and were often beautifully decorated. 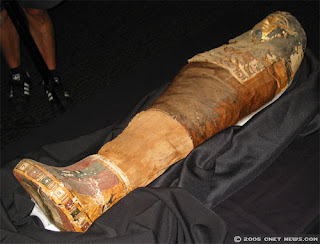 These preparations led up to the funeral procession, which included mourners, servants, and priests. The mummy was deposited in its tomb to await, according to Egyptian belief, the weighing of its deed in the scale of Osiris.
Since the Egyptian gods were associated with animals, the Egyptians also mummified jackals, cats, snakes, lizards, hawks, bulls, baboons, and crocodiles. Near the cities there were large cemeteries for animals.