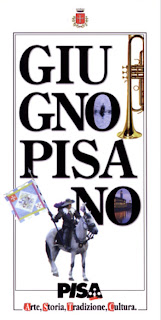 Disputed in the last Sunday in June, it is undoubtedly the event the Pisans feel most strongly about . On that one day they once more discover the heated opposition between the factions, ready to root for the colors of their own Magistratura (or Court. The ‘Magistratura’ is the political-military organization of a quarter or of the team which participates in the Game). The Gioco del Ponte virtually closes the events of the Giugno Pisano, reproposing, in the magnificent setting of the lungarni which are jammed with people (generally there are no less than 100,000 spectators, sometimes many more) the ancient historical opposition between the Parties of Mezzogiorno (south of the Arno) and Tramontana (north of the river). The actual battle is preceded by a historical 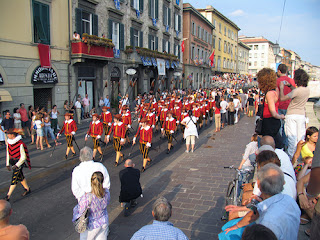 procession with participants wearing period armature and costumes (around 750 in Spanish style) and with the banners of the participating teams of the four ‘historical’ quarters of Pisa, represented on the city plan by dividing lines that coincide with the intersection of the axis of Borghi-Ponte di Mezzo-Corso Italia with the curve of the Arno: S. Maria, S. Francesco (Tramontana); S. Antonio, S. Martino (Mezzogiorno), to which are added the formations of S. Michele, Mattaccini, Satiri, Calcesana – for the northern part – and those of S. Marco, Leoni, Delfini, Dragoni – for the southern part. 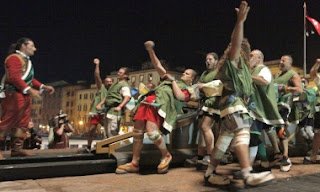 The Gioco del Ponte is a historical re-evocation, where elements of folklore fuse with the proud warrior tradition of the Parties, who fight for possession of the bridge, no longer with maces shields and ‘targoni’ (an instrument in wood still carried by the combatants during the procession, it is offensive and defensive at the same time, spreading out and rounded off at the top, sharp and pointed at the bottom) but challenging each other in a trial of strength which consists in pushing a 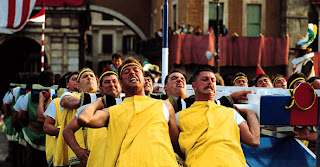 heavy “Carrello” (carriage) weighing approximately seven tons, set on tracks fifty meters long. The final victory goes to the Party which has won the greater number of battles, pushing the trolley into the enemy field and knocking over the staff with the banner with the colors of the enemy party. 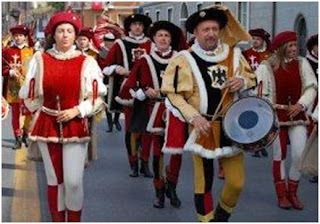 While the origins of the game are lost in the mists of time (a legend attributes its institution to Pelops, the mythical founder of Pisa, who wanted to recall his native Olimpic Games; another to the roman emperor Hadrian who attempted to present a ‘Pisan’ version of gladiatoral combats on the shores of the Arno; and still another has it that the Games were instituted in memory of the battle on the bridge between Pisans 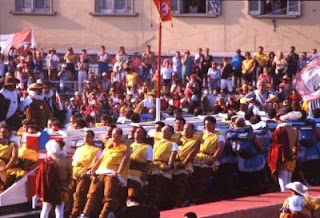 and Saracens on the occasion of the legendary episode of Kinzica de’ Sismondi), mention of a Gioco del Ponte does appear in 1490. It was Lorenzo the Magnificent who decided to transfer the game into its natural setting. Previously, as far back as could be remembered a sort of medieval tournament called Gioco del Mazzascudo had been held in the piazza delle Sette Vie (now piazza dei Cavalieri) between the Parties of the Rooster and the Magpie and which was thought to be the ancestor of the present Game. Originally the Gioco del Ponte took place twice a year: January 17th, the day of Saint 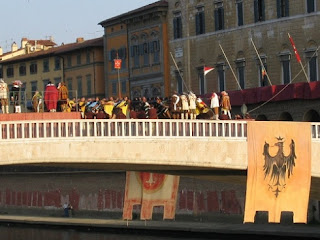 Anthony Abbot, was the date of the so-called ‘Battagliaccia’, a sort of dress rehearsal of the ‘Battaglia Generale’ which almost always took place on the occasion of visits to Pisa of the various rulers and other noble guests. It continued to be held until 1782 when it was suppressed by Pietro Leopoldo on grounds of public order. After an extraordinary edition (1807) it lapsed into oblivion until it was re-introduced in 1935. Suspended because of the war, it returned to the bridge from 1950 to 1963. After another lengthy interruption, the event returned to its original magnificence in the edition of 1982.