The Corn Palace serves as a multi-use center for the community and region. The facility hosts stage shows, as well as sports events in its arena. The World’s Only Corn Palace is an outstanding structure which stands as a tribute to the agricultural heritage of South Dakota.
The original Corn Palace, called “The Corn Belt Exposition” was established in 1892. Early settlers displayed the fruits of their harvest on the building exterior in order to prove the fertility of South Dakota soil. The third and present building was completed for it first festival at the present location in 1921.
The exterior decorations are completely stripped down and new murals are created each year. The theme is selected by the Corn Palace Festival Committee and murals are designed by a local artist.

The World’s Only Corn Palace is Mitchell’s premier tourist attraction. Some 500,000 tourists come from around the nation each year to see the uniquely designed corn murals. The city’s first Corn Palace was build as a way to prove to the world that South Dakota had a healthy agricultural climate.

Eight years before the turn of the 20th century -1892- when Mitchell, South Dakota was a small, 12-year-old city of 3,000 inhabitants – the WORLD’S ONLY CORN PALACE was established on the city’s Main Street. During its over 100 years of existence, it has become known worldwide and now attracts more than a half a million visitors annually. The palace was conceived as a gathering place where city residents and their rural neighbors could enjoy a fall festival with extraordinary stage entertainment – a celebration to climax a crop-growing season and harvest. This tradition continues today with the annual Corn Palace Festival, August 26th – August 30th, 2009.

By 1905 the success of the Corn Palace had been assured and a new Palace was to be built, but this building soon became too small. In 1919, the decision to build a third Corn Palace was made. This one was to be permanent and more purposeful than its predecessors. The present building was completed in 1921, just in time for the Corn Palace Festivities. That winter Mitchell hosted its first boys state basketball tournament. The building was considered to have the finest basketball arena in the upper Midwest area. 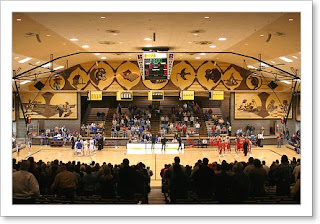 In the 1930’s, steps were taken to recapture the artistic decorative features of the building and minarets and kiosks of Moorish design were added restoring the appearance of early day Corn Palace.

Today, the Corn Palace is more than the home of the festival or a point of interest of tourists. It is a practical structure adaptable to many purposes. Included among its many uses are industrial exhibits, dances, stage shows, meetings, banquets, proms, graduations arena for Mitchell High School and Dakota Wesleyan University as well as district, regional and state basketball tournaments. USA Today named the Corn Palace one of the top 10 places in America for high school basketball.

The Palace is redecorated each year with naturally colored corn and other grains and native grasses to make it “the agricultural show-place of the world”. We currently use 13 different colors or shades of corn to decorate the Corn Palace: red, brown, black, blue, white, orange, calico, yellow and now we have green corn! A different theme is chosen each year, and murals are designed to reflect that theme. Ear by ear the corn is nailed to the Corn Palace to create a scene. The decorating process usually starts in late May with the removal of the rye and dock. The corn murals are stripped at the end of August and the new ones are completed by the first of October.

Cherie Ramsdell is the current panel designer. Our current theme is entitled “America’s Destinations”. The Corn Palace is known around the world as a folk-art wonder on the prairie of South Dakota.

This annual redecorating process began on Monday, June 8 as 16 decorators started removing the dock and rye and began replacing those items. The Corn Mural will remain intact until the annual Corn Palace Festival at which time the new mural drawings will be placed on the Corn Palace. The process should be completed about mid-October. 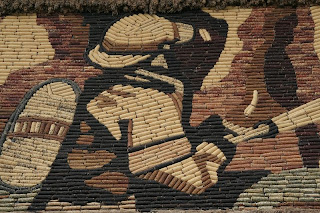 “Through the Ages” has been selected as the theme for this year’s decorating process by the Corn Palace Festival Committee. “As people travel across this country to see these murals on Mitchell’s Corn Palace, the Festival Committee felt this theme depicting various modes of transportation would be interesting to all ages as we think about how travel has changed “Through the Ages”, said Corn Palace Director Mark A. Schilling. 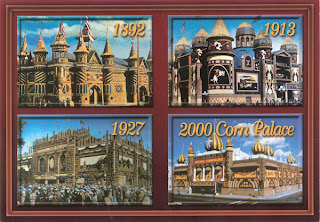 One unique insignia is the Boy Scout 100-Year Anniversary Logo found in the picture of the canoe. The Boy Scouts will be celebrating 100 years in 2010 when the corn mural will appear on the Corn Palace.
The Corn Palace Festival Committee has chosen the following objects to be shown on the panels depicting various modes of transportation such as an airplane, a segway, a sailboat, a bike, a motorcycle, a canoe with Boy Scout logo, a hot air balloon, a snowmobile, a stagecoach, a four-wheeler, a car, and a train.