Since 1986, every third weekend of September, the city of Le Puy-en-Velay (Haute-Loire) found its Renaissance colors. Through a festival of a high culture, the city takes the guise of an old and true archery contest to get it  back into the glorious past.
For four days in September, priority is given to street performances and the reconstruction of what  daily life in the sixteenth century in the Velay would have been like.  Tented camps, struggles with the sound of cannon fire, folk artisans, daily cooking and meal time, and  pilgrims on their way to Saint Jacques de Compostela  to set up their tents and compounds for so they can rough it just like their ancestors.
Each year, several days after the school year has been out, the entire city and its people gather to live and work in the Bird King Renaissance Festival  offering  all who  who attend the festival, to join them for the four days of the  festival.  Many attendees come  in period costumes and they continue their adventure, learning and participating , but this time as actors. Thus everyone and anyone who attends, to the extent of their expertise, can live and work for a few days of friendship and folly in a time of history gone by.

Whether it’s costumes, daily life, crafts, cooking, military camps, music and/or dance … the sites and sounds of the King of the bird must “breathe, sound and look” just like the real sixteenth century.

Each year, the Renaissance du Puy-en-Velay is a real history lesson  for many schools and their students.  Students are thus likely to move between different sites and locals, exploring the different parts and surroundings of the festival.  They take advantage of all of  the activities that are scheduled for each and every day, many of which are much more educational than it may really seem.
Journey through a calligraphy workshop, through the learning of flavors, plants, weapons, metalwork from the many participants living and working at the festival  and ending with the old games, diving headlong into the Renaissance is a  full on life expericence you will never want to forget about.

In addition to the programs and festivities offered for the festivals large crowds.  Many street performers and musicians will be strolling in and around the grounds, also at the many different venues that surround the festival.   The King of the Bird is also an opportunity to share many  moments of spectacles and emotions.

Concert In The Land of 1001 Nights

Ambassador Suleiman the Magnificent wanted to offer our first Sir Francis a gift that would be worthy of a king of his  high quality.
Also, it is an evening full of perfumes and spices from the East, that will be seen and smelled during the ceremony:  silk, coffee tables, mint tea, colored projections, as you will be the guests of His Highness the Caravensérail and have the chance of leaving you enchanted by the music of DAYAZELL at the nights  concert!

At the opening of each of the dances,  the group of dancers,  well known throughout  the city, and Pavanes Caprioli, offer evocative dances full of  imagination and of the ball that would have happened at the time of the Renaissance period.
Then driven in turn by the groups:  Picabofà, Zucati, and Tempradura Waraok, great balls of Velay and the Verbena Harvest,  will provide an opportunity for everyone to discover his and her  talents as dancers through the advice of Mr Sauret, the master of the ceremonies.
Finally, to complete  the setting of the ball, the walls will be dressed with  colorful images and  the  combination of poetry and surprise …

The March of Time in the Footsteps of François I

More than ever,  the  approach is  to take on the looks of different parts of  Europe and its many cultures, the King of the Bird, in collaboration with the twinning committees department and the departmental committee of hiking.  There has been a new,  organized march to the festival with  costumes and equipment from the Renaissance  time period.  The European guests of twinning committees and all those who might want to try their luck in the conditions of the 16th century, are invited to be at the church square of Polignac on  Saturday, September 17 at 2 p.m., to trace the route used by their ancestors  in 1533 and  by Her Majesty François.   First by stopping at Le Puy Sainte Marie.  At about 2:30, historic marchers parade through the city, partying and marching to the   celebratory music and  will meet up with the Consuls and other municipal officials of the city.

The  promise for a better future for children born during the year, and for those aged.  The  seven harvests will be welcomed by all the people,  cheering,  in which water, light and nature become the guarantors of a bright future of every child, for they are the  hero’s of the day!

The Parade of Adventurers

Vellaves groups gather and get ready to embark on the third expedition of Jacques Cartier in Quebec ( the military, farmers, loggers, bad girls chained …) walk and march  in a procession from the  home of Mgr Galard, to Martouret to bid farewell to His Majesty,  François I.

Ceremony to the King

Courage is one of the virtues of the people of  Vellaves, they are likely to want to sail with Jacques Cartier on his last expedition to his landing at  Quebec … However, before leaving the good town of Le Puy Sainte Marie and not knowing when they will see it again, they want to say goodbye to their sovereign people  during a special ceremony,  combining the art of music and dance, in a tribute to the military.

The Coronation of The King of the Bird 2011

The finals of the archery competition and the unique spectacle of the Coronation of King’s,  winner of the Bird 2011, will be held on  Saturday, September 17th,  in the large gardens of Henri Vinay Lice! Also of  note, is that  the coronation will result in many  spectacular sights and sounds,  including the Sonneurs Velay and the Alchymère acrobatic Company.  An event not to be missed!

Presentation of “Embassies of Distant Lands”

Her Majesty will give the  French representatives the first hearing to listen to them   talk of distant lands and conquests, that they have recently discovered or have long been linked by trade and political  relations. Thus, she will  surely  welcome, as it should be,  the Embassy of Suleiman the Magnificent and the caravans of Samarkand,  returning from their long  journeys on the  Silk Road,  but also the brave passengers of the Isles and other settlements of the city, who presented the many  exotic objects brought back from their expeditions to Aztec, China or in the frozen steps of other northern countries.

The traditional historic parade is on Sunday.  Participants gather at the same time every year.  Thousands of participants will start to convene at approximately 4 p.m at the cathedral, the parade  will finnish up  late afternoon at the top of the Boulevard du Breuil.

Archery competitions and archery law are the main theme of the celebrations of the King Bird.  Pull the bird was once a widespread custom throughout France.  It was established by Charles V,  after the close of many of the gambling halls and  houses.  Pull the bird was similar  to kill the parrot or Papagaï (the name given to the parrot in Occitan), some of the other well known archery event that had taken place in Europe.
Le Puy-en-Velay, dates back to 1524.  That year, archers and musketeers  had organized into a brotherhood by the consuls and  were allowed to compete in  the bird to create a healthy rivalry among the younger members of their brotherhood, and thus, in turn to get the younger members to not  “follow your lust of gambling and taverns or deal with a thousand other passions and dissolutions, how youth is subject “.  The shooting of the bird was held annually after that. 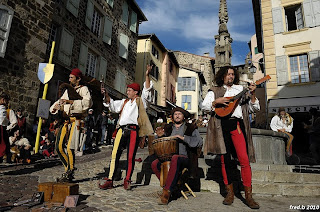 The winner was proclaimed king for a year, during which he was entitled to wear the sword, to attend the processions to the rank of consuls and order ” a company fusilhers arquebuziers with sergeans and drums”.  He was also entrusted with the keys of the city and  was exempt from taxes.  After a few interruptions in history,  shooting the bird was done regularly until the Revolution.  After this, an attempt to restore the custom of shooting the bird was held onSeptember 3, 1814.   It was not until the inter-war period, from about 1920 to 1940, the tradition gained favor  at Breuil Mercoeur, by historian Albert Vellaves Boudon-Lashermes.
Finally, it is with the creation of the  Renaissance Festival and of the King of the Bird in 1986, that  the city of Puy,   reestablished the famous festival once again and became a popular tradition to this day.

The Assistance of the King of the Bird

Playoffs: Equipment, bows and arrows, is provided by the Organizing Committee of the King of the Bird.  The playoffs will take place at du Breuil, Saturday, Sept. 17, after registration.

Final coronation of the new King and Prince of the Bird 2011: Finalists will compete in the gardens of  Henri Vinay, Saturday, September 17th. After this competition,  the winner will be announced and crowned “King”, by  the archer that  reaches the heart of the bird target or the one that ends up the closest.

One of the greatest features of the King of the Bird is the impressive number of camps that take hold and populate  the grounds around  the city and allow the towns people to live and play in all pomp and circumstance of a Renaissance fare, recreating the festival of a time gone by.