Metropolis, IL’s biggest week of the year is drawing near. From Thursday, June 9, through Sunday, June 12 the town of fewer than 7000 people will become a real metropolis, or at least close to it, as thousands of visitors from around the country, and even around the world, visit for the 33rd annual Superman Celebration!
“It’s a chance for people of all ages to come together and just enjoy a weekend of fun,” explained Metropolis Tourism Director Angie Shelton. “You never know who you’ll meet… and you never know what you’ll see!”
As always, a big draw for Superman enthusiasts is the lineup of celebrities. Last year’s special guests included Laura Vandervoort and Sam Witwer from television’s Smallville; Noel Neill, Lois Lane from The Adventures of Superman; Ilya Salkind, producer of Superman I, II and III; and the legendary comic book artist, Carmine Infantino.

2017 marks the 45th year that Metropolis has been designated as the adopted “Home of Superman”.
This years celebration will be dedicated to the memory of Noel Neill.  The first lady that had portrayed Lois Lane in the very first Superman t.v. series.  Neil was a repeat guest to the Superman Celebration for many years and was given the title of “First Lady of Metropolis”.  A statue of her portraying Lois Lane was revealed in her honor.  Noel passed away July 2016.  This year the Celebration takes place June 8th to June 11th. 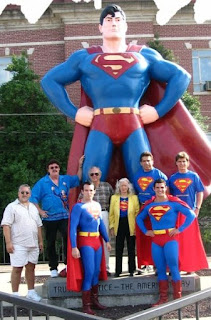 In addition to Infantino, artists and writers, including Dave Beaty, Josh Elder and members of the Mid-south Cartoonist Association, were among those who shared their love of comics with visitors to the Celebration.
To honor Noel Neill, the “First Lady of Metropolis,” a statue of her likeness was unveiled at 10 a.m. Friday, June 11 at the corner of Eighth and Market streets. The slightly larger-than-life bronze statue features Neill in her famous pose as reporter Lois Lane. The statue is the centerpiece of a newly constructed setting which features engraved bricks. Hundreds of people purchased personalized bricks to help fund the $65,000 project. 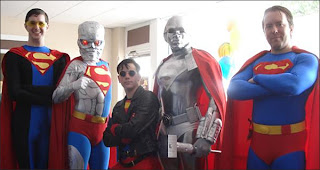 Returning to this year’s line-up are the 2nd Annual Superman Super Site Meet & Greet at Dippin Dots (RSVP here!), Stump the Superman Expert, a Cheetos Eating Contest and game-show type event, “60 Seconds to be Super.”
During the four-day celebration, visitors can sample food items at numerous cafes-on-wheels and browse sidewalk sales. The always-popular carnival brings all sorts of exciting rides, along with concessions, including corn dogs and cotton candy.
Right in the middle of all of the activities visitors will have the opportunity to pose with the world-famous 15-foot-tall bronze statue of Superman and tour the SuperMuseum, which holds the largest collection of Superman memorabilia in the world. 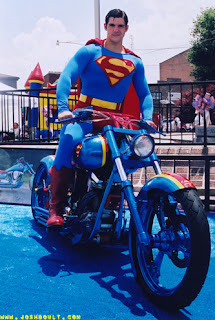 The annual Superman Celebration takes place in Metropolis, Illinois which has welcomed tourists and curiosity seekers to the one-and-only official “Home of Superman” for over three decades. A billboard with the image of Superman points the way to downtown Metropolis for motorists entering the city from the east side. Other images of the super hero can be found all around this town of less than seven thousand inhabitants.
Superman souvenirs are available everywhere as well. At one time, the Chamber gave away free packets of Kryptonite to children but were forced to cease this tradition when “DC Comics” claimed the practice was a copyright violation. 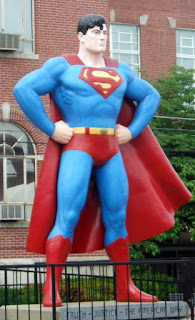 Things haven’t always been so rosy in Metropolis though.
In 1972, the town had plans to build a thousand-acre “Amazing World of Superman”, a $50 million theme park, with a 200-foot-tall statue. Cars would drive between Superman’s legs to enter the park. Then the Arabs shut off the oil and the bankers shut down Metropolis’s dream.
The town took over a decade to recover. Then, very cautiously, Metropolis scraped together a thousand bucks in 1986 and put up a seven-foot fiberglass Superman in the town square. It quickly became a target for literal-minded vandals who wanted to see if the Man of Steel was stronger than a speeding bullet. He wasn’t, and once again Metropolis’s efforts to celebrate their hero were thwarted. What could a small town like Metropolis do? 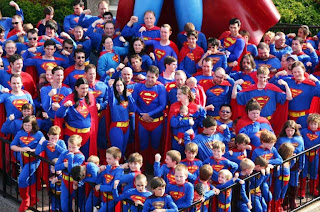 In 1993, they did a lot. On June 5th, citizens of Metropolis unveiled a new fifteen-foot bronze statue of Superman preceding the town’s fifteenth annual Superman Celebration. Built by the same company that created the Emmy statue outside the Academy of Television Arts in Hollywood, the monument to the most famous flying hero ever stands proudly in full color in front of the courthouse on Superman Square. Tens of thousands have since visited the statue, and it has become a focal point of the small town’s revival in both an economic and cultural sense. (Several community service groups raised over $100,000 for the project by selling personalized bricks that beautify the base and walkway around the statue.)

Metropolis, Illinois, is located just across the Ohio River from Padukah, Kentucky. From Interstate 24, follow Route 45 West for about five miles. Once you cross Massac Creek, the highway twists left then right before turning into Fifth Street. The Superman statue, located at the center of town, is at the intersection of Fifth and Market Streets. You can leave your car in any of the designated parking spots, and easily walk to all of the sites.

In 2005, The Metropolis Chamber of Commerce, Metropolis Illinois, the Home of Superman, announced the formation of “The Noel Neill Statue Committee”.
The committee’s sole purpose is to spearhead and oversee the construction of a life-size bronze statue of Noel Neill as “Lois Lane” to be placed in Metropolis, Illinois.
The idea is to acknowledge Noel’s contributions to the Superman Celebration as the “First Lady of Metropolis” and her portrayal of Lois Lane in the Serials and the TV series of the 1950s, “The Adventures of Superman” with an honorable and permanent gesture of love from the citizens of Metropolis and from her countless fans around the world.

The concept was presented to Noel at her 85th Birthday Party held in North Hollywood, California and, with Noel’s blessing, a competition for the design of a Noel Neill as Lois Lane statue was thrown open to Sculptors everywhere!
Pictures of the 2 foot size scale model of the winning sculpture were unveiled at the 2008 Superman Celebration in June 2008.
The revenue from all bricks and commemorative plaques will help pay for the sculpting and the placement of the statue which will be in close proximity to the existing Superman statue. 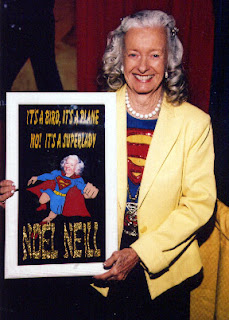 The groundbreaking ceremony for the six foot, bronze Noel Neill Statue took place on Saturday, June 13, 2009 during the 2009 Superman Celebration in Metropolis, Illinois.
The unveiling ceremony took place at 10am on Friday, June 11, 2010 at the corner of Eighth and Market streets. Neill traveled from California for the special honor, and met the artist who sculpted her likeness, Gary Ernest Smith. Smith, and Kevin Maag, from Metal Art Foundry, made the journey from Utah for the ceremony. Mayor Billy McDaniel and other local officials also took part in the unveiling ceremony