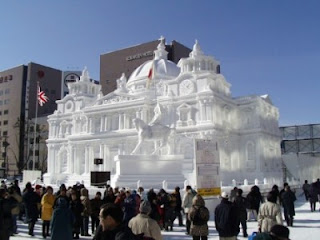 The Sapporo Snow Festival is a famous festival held annually in Sapporo, Japan, over 7 days in February.  Currently, Odori Park, Susukino, and Tsudome are the main sites of the festival.  The 2011 Yuki-matsuri dates are February 7th to the 13th.
The festival is one of Japan’s largest and most distinctive winter events.  In 2007, about 2 million people visited Sapporo to see the hundreds of snow statues and ice sculptures at the Odori Park and Suskino sites, in central Sapporo, and the Satoland site.  The festival is thought to be an opportunity for promoting international relations. The International Snow Sculpture Contest has been held at the Odori Park sit since 1974, and teams from various regions of the world participate. 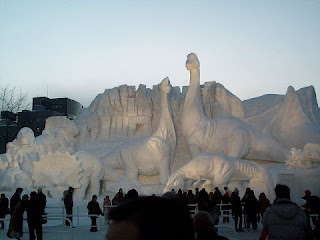 The subject of the statues varies and often features as event, famous building or person from the previous yer.  For example, in 2004, there were statues of Hideki Matsui, the famous baseball player who at that time played for the New York Yankees.  A number of stages made out of snow are also constructed and made out of snow are also constructed and some events including musical performance are held.  At the Satoland site, visitors can enjoy long snow and ice slides as well as a huge maze made of snow.  Visitors can also enjoy a variety of regional foods from all over Hokkaido at the Odori Park and Satoland sites, such as fresh seafood, potatoes and corn, and fresh dairy products. 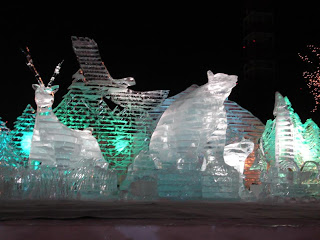 Every year the number of statues displayed is around 400.  In 2007, there were 307 statues created in the Odori Park site, 32 in the Satoland site and 100 i the Susino site.  The best place to view the creations is from the TV tower at Odori Park.  Most of the statues are illuminated in the evening.  The Sapporo Snow Festival Museum is located in the Hitsujigaoka observation hill in Toyhira-ku, and displays historical materials and media of the festival. 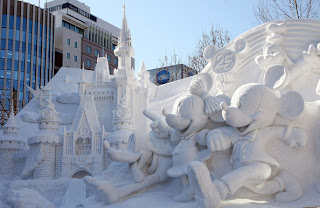 The Snow Festival began in 1950, when 6 local high school students built 6 snow statues in Odori Par.  In 1955, the Japan Self-Defense Forces form the nearby Makomani base joined in and built the first massive snow sculptures, for which the Snow Festival has now become famous for.  Several snow festivals existed in Sapporo prior to the Sapporo Snow Festival, however, all of these were suspended during World War II.
During the Energy crisis of 1974, snow statues were built using drums.  This was due to the shortage of gasoline which  caused  many of the trucks that were used to carry snow to the site,  were unavailable, due to the shortage and rationiong of fuel.  In that same year, the International Snow Statue Competition started and since that year many snow statues built by teams from other countries have been  featured; especially from some of the sister cities of Sapporo,  such as Munich Germany. 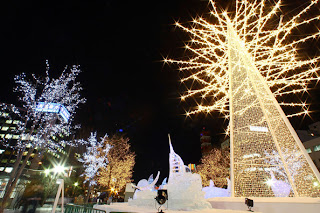 In years when the accumulated snowfall is low, the Self-Defense Force, for whom participation is considered a training exercise, brings in snow from outside Sapporo.  The Makomanai base, one of three main sites from 1965, hosted the largest sculptures, with a emphasis on providing play space fro children.  Use of the Makomanai site was suspended in 2005 and moved to the Sapporo Satoland site located in Higashi-ku in 2006.  In 2009, the Satoland site was moved to the Tsudome (Sapporo Community Dome) site.  The Tsudome, located close to the Sapporo Satoland, is a dome for multiple sport events.
Nakajima Park was established as one of the festival sites in 1990 however, it was removed as a site in 1992.  The thrid site, known as the Suskino Ice Festival, is situated in the night life district of Susukino and includes predominantly ice carvings.  The site was approved as one of the festival sites in 1983.  Every year, the IcSuskino Queen of Ice, a beauty contest, is held at this site.