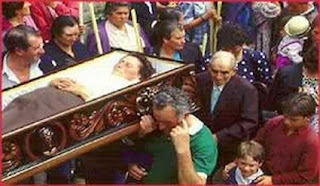 The Fiesta de Santa Marta de Ribarteme, also known as the festival of near death experiences, is a slightly odd festival to say the least. Held in a small Spanish village, that borders Portugal – Las Nieves, Pontevedra, in Galicia and taking place on the 29th of July. 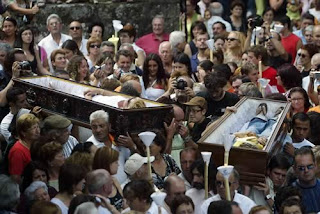 Even though centered around a fairly morbid theme, the festival itself is a celebration with firework displays and the usually partying that carries on well into the following day.
Thousands of people line the streets of this tiny village. At 10am, the relatives of the people who narrowed escaped death are expected to carry their loved ones in coffins to the small church where there is a shrine to the Virgin Santa Marta. 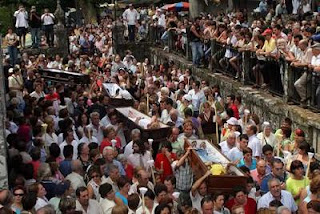 After Mass, which is projected across the village using loudspeakers, the procession then walks to the local cemetery and then back to the church with a large statue of the Virgin Santa Marta overseeing the celebrations.