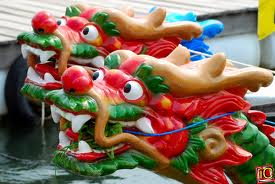 His countrymen paddled swiftly out to the middle of the river to retrieve his body, while others threw packets of rice in the water to distract the fish from eating the poet’s body.
These two acts, it is said, are the origin of the festival’s two main preoccupations – the glutinous rice dumplings known as zongzi, and the dragon boat races. 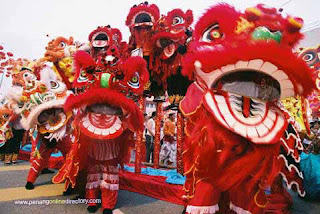 Dragon boat racing, despite its roots in ancient tradition, are as exciting a sport as they come. Two or more boats compete against each other in heats spanning distances of about 1 1/4 mile (2000 meters) or less.
The boats conform to traditional designs, and are extremely eye-catching. Each boat is mounted with a dragon’s head and tail, finely carved to meet the traditional Chinese dragon appearance (in case you didn’t know, a Chinese dragon has an ox’s head, a deer’s antlers, a horse’s mane, and a fish’s tail). 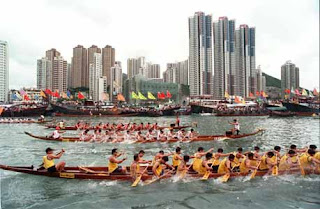 Each boat is crewed by up to twenty paddlers, facing the front of the boat (as opposed to Western rowing sports, where the rower faces the rear). A drummer sits in front of the boat, facing the rowers, dictating the rhythm for the row team.  A sweep, or tiller, sits aft, steering the boat.
Strength and endurance are necessary, but not sufficient, for success. Dragon boat racing, as a sport, demands the closest teamwork possible from teams that want to get through the finish line first. 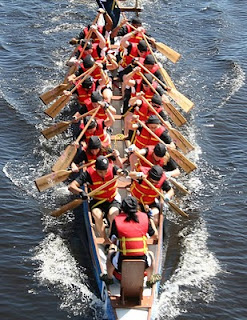 In Penang, Malaysia, the dragon boat races are especially famous. The region’s first dragon boat race was held here in 1956, on the occasion of the 100th founding anniversary of Georgetown.
Initially, the races were open only to Malaysian teams. Overseas participation was allowed in 1979, attracting contestants from Hong Kong and Singapore.
Today, the Penang International Dragon Boat Festival attracts contestants from around the globe, including teams from Europe and the USA. Any group affiliated with the International Dragon Boat Federation (IDBF) may join. 62 countries are represented in the IDBF. 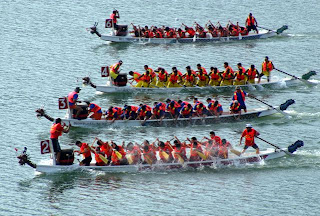 The Penang International Dragon Boat Festival takes place at the Teluk Bahang Dam, Penang, from May 23 to 24. In two days, a number of races are staged, including races for men, women, and mixed teams.
Teams come from all over, with some local teams representing government offices, fraternal associations, and corporations. The local teams bring along the most enthusiastic fans, cheering at the top of their voices for their favorites to win.
The reservoir at the Teluk Bahang Dam has served as the Dragon Boat Festival’s venue since 2002, as it provides a safer, more controlled environment than the seafront venue used from the beginning of the race.
The view, too, is top-notch, as punters get to see the race against the green hills of the Penang countryside.