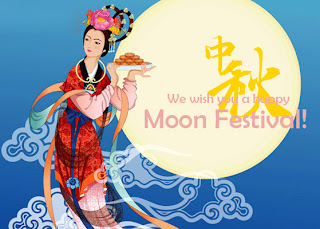 Moon Festival, Mooncake Festival, or the August Moon Festival – they are the different names of the same festival, which is popularly also known as the Mid Autumn Festival. It is a celebration of abundance and togetherness.  The Chinese believe in praying to the moon god for protection, family unity, and good fortune. It falls on the 15th day of the 8th lunar month, a date that parallels the Autumn Equinox of the solar calendar.On this day the moon is unusually bright, clear and round. Historical accounts are silent about the exact origin of this festival, but as far as the assumption of the scholars are concerned, it is related to the two customs in China.
The first customs concern the Chinese farmers. China is an agricultural country and farming in China is intricately associated with the seasons. In the ancient times, the farmers used to worship Earth God and prayed for a good harvest when they sowed the seeds during spring. Once again during autumn, the farmers worshipped the Earth God and offered their gratitude on having reaped a good harvest. This was known as the autumn reward. Some people believed that the Mid -Autumn Festival orginated from the autumn reward ritual.
The second custom is related to the worship of the moon. The Mid Autumn Festival occurs at the autumn equinox when the sun shines vertically on the equator, equally dividing the day and the night in the northern and the southern hemisphere. At this time, the sunlight shines vertically on the equator, equally dividing the day and night in both the southern and northern hemispheres. In the evening the moon appears with gentle winds and the sky is clear, apart from the light clouds. This is the perfect time to watch the moon. This day was later assigned to the worship of the moon. 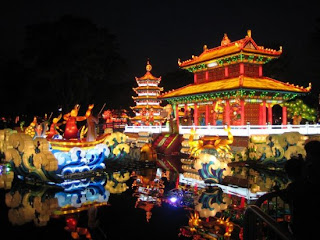 This custom of worshipping the moon,called xi yue in Chinese, can be traced back to the ancient Xia and Shang Dynasties (2000 BCE-1066 BCE). In the Zhou Dynasty too (1066 BCE-221 BCE), the people celebrated the Mid-Autumn Festival to worship the moon. This practice became very prevalent during the time of the Tang Dynasty (618-907 CE) and people enjoyed and worshipped the full moon. In the Southern Song Dynasty (1127-1279), people started making round moon cakes, as gifts to their relatives as an expression of their best wishes for a family reunion. At night, they came out to watch the full moon to celebrate the festival. Since the Ming (1368-1644), and Qing Dynasties (1644-1911), the custom of Mid-Autumn Festival celebration has become extremely popular and is being grandly celebrated.
The Mid-Autumn Festival is one of the two most important holidays in the Chinese calendar, the other being the Chinese Lunar New Year, and is a legal holiday in several countries.

The most popular legend about the origin of the Mid Autumn Festival goes like this:- Once the earth was scorched by ten suns and the people suffered a lot due to this. The crops were parched and the people were plunged into penury. A strong and powerful young man called Hou Yi was quite worried about the entire situation. He ascended the summit of the Kunlun Mountain, exercised his superhuman powers and shot down nine suns one after the other, with his bow and arrow. He also ordered the last sun to rise and set according to a time set by him. Hou Yi was respected and loved by people for his

great feat that rescued the lives of many. Lots of people of ideals and integrity came to him to learn martial arts from him. A person named Peng Meng lurked among them.

Hou Yi had a charming and beautiful wife named Chang E whom he loved immensely and with whom he never wanted to part. Once on his way to the Kunlun Mountain , Hou Yi stumbled upon the Empress Wangmu who was touched by his love for his wife, gave him a parcel of elixir, at the intake of which one would ascend immediately to heaven and become a celestial being. However the elixir was only good to make only one person immortal. Hou Yi however hated to part with his wife and asked Chang E to keep the elixir with her for the time being. Chang E kept it in a treasure box and hid it in secret place. But it could not escape the watchful eyes of Peng Meng.
A few days later, when Hou Yi went for hunting, Peng Meng grabbed the opportunity he has been waiting for. He rushed into Chang E’s chamber, sword in hand and demanded the elixir. Aware of the fact that she was unable to measure up to the strength of Peng Meng, Change E made a prompt decision at a critical moment. She opened her treasure box, took up the elixir and swallowed it in one gulp. After a moment, she felt light and her body floated off the ground, rose higher and reached the sky. Chang E landed on the moon and became an immortal goddess. Peng meng escaped.

Hou Yi could not believe the misfortune that had befallen him. Overburdened with grief, he looked up at the sky and called out the name of his beloved wife. He noticed that the moon was unusually bright and clear that night and on it there was a swaying shadow that resembled his wife. He tried to chase the moon but the moon eluded him.
Huo Yi began to miss his wife terribly. He had an incense table arranged in the back garden and put fresh fruits and sweet meats on it, that Chang E loved and held a memorial ceremony for her.
When people heard that Chang E has transformed into a celestial being, they made arrangements for incense table in the moonlight and prayed to her for good fortune and peace. This is how the custom of worshipping the moon became popular among the people. 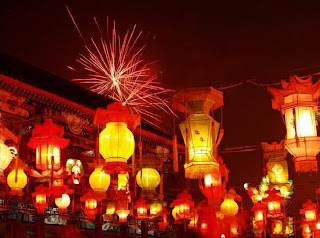 Today couples declare their undying love for each other under the full moon of this mid autumn day. Estranged lovers pray for their reunion.
Another legend concerns Wu Kang, a restless fellow who found it difficult to concentrate on a particular thing. One day he decided that he wanted to be immortal and went to live in the mountains where he met an immortal and asked him to teach him the secrets of immortality. First the immortal taught him about the herbs used to cure sickness. But a few days later his characteristic restlessness surfaced and Wu Kang asked the immortal to teach him chess, but after a short while his enthusiasm again waned. Then Wu Kang was asked to go through books on immortality. As usual, Wu Kang became bored with it in a short while and asked whether they could travel to some new and exciting place. Fed up with Wu Kang’s impatience, the master banished him to the Moon Palace commanding him to cut down a huge cassia tree before

returning to the earth. Though Wu Kang continued to chop the tree day and night, yet the magical tree restored itself with each blow, and therefore he is there still chopping the tree.
China was ruled by the Mongolian people during the Yuan dynasty (A.D. 1280-1368). Leaders from the preceding Sung dynasty (A.D. 960 – 1280) were unhappy at submitting to foreign rule, and set to coordinate a secret rebellion. As the Moon Festival was drawing near, the leaders of the rebellion ordered the making of special cakes.
At the back of each was a message with the outline of the attack. On the night of the Moon Festival, the rebels successfully attacked and overthrew the government. What followed was the establishment of the Ming dynasty (A.D. 1368-1644). Today, moon cakes are eaten to commemorate this legend. 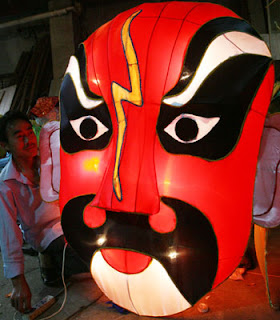 According to the legend of the “Jade Rabbit”, three fairy sages transformed themselves into pitiful old men and begged to eat something from the fox, a rabbit and the monkey. The fox and the monkey both had food to give to the old men, but the rabbit who had nothing to offer, offered his own flesh instead, jumping into a blazing fire to cook himself. The sages were so touched by the rabbit’s sacrifice that they allowed him live in the Moon Palace where he became the “Jade Rabbit.”

Significance of the Moon Cake

There is an interesting story behind the popularity of the Mooncakes. During the Yuan Dynasty (1280 A.D – 1368 A.D), China was ruled by the Mongols. They were very oppressive rulers and were overthrown by the Chinese. It might sound curious but the fact remains that the mooncakes played a significant role in the rebellion. The Mongols did not eat mooncakes and the Chinese were quick to take advantage of that. They found an innovative way of coordinating the revolt. Leaders of the revolt

distributed the mooncakes among the common people under the pretext of celebrating the Emperor’s long life. Each mooncake had an outline of the attack baked within its skin. The secret message informed the people to revolt on the 15th of the 8th moon (also the Autumn Moon festival). On the night of the Moon Festival, the rebels successfully attacked and overthrew the government. Since then the mooncakes became a national tradition of China.