The origins of Mardi Gras can be traced back to Medieval Europe, though we have no written record of how that really transformed into the current Mardi Gras of today. But the origins of the Mardi Gras we celebrate today….with Kings, Mardi Gras colors, and brass bands….are traced to New Orleans.
Although we can trace its history to the Romans, a French-Canadian expolorer, Jean Baptiste Le Moyne Sieur de Bienville, landed on a plot of ground 60 miles directly south of New Orleans in 1699 and called it “Pointe due Mardi Gras”. He also established “Fort Louis de la Louisiane” (which is now Mobile) in 1702. In 1703, the tiny settlement of Fort Louis de la Mobile celebrated the very first Mardi Gras. 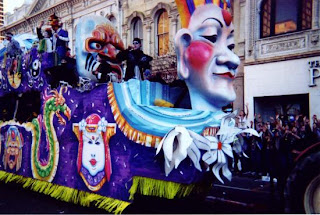 In 1704, Mobile established a secret society (Masque de la Mobile)….similar to those who form our current Mardi Gras Krewes. It lasted until 1709. In 1710, the “Boef Graf Society” was formed and paraded from 1711 through 1861. The procession was held with a huge bull’s head pushed along on wheels by 16 men. This occurred on Fat Tuesday.
New Orleans was established in 1718 by Jean-Baptise Le Moyne. By the 1730’s, Mardi Gras was celebrated openly in New Orleans…but not in parade form. In the early 1740’s, Louisiana’s Governor The Marquis de Vaudreuil, established elegant society balls…the model for the New Orleans Mardi Gras balls of today. 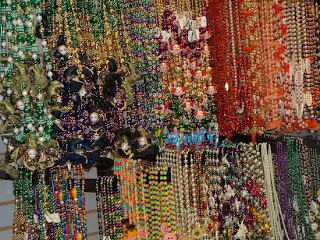 The earliest reference to Mardi Gras “Carnival” appears in a 1781 report to the Spanish colonial governing body. That year, the Perseverance Benevolent & Mutual Aid Associaiton is the first of hundreds of clubs and carnival organizations formed in New Orleans.
By the late 1830’s, New Orleans held street processions of maskers with carriages and horseback riders to celebrate Mardi Gras. newspapers began to announce Mardi Gras events in advance.
In 1871, Mardi Gras’s second “Krewe” is formed, the Twelfth Night Reveler’s, with the first account of Mardi Gras “throws”.

1872, was the year that a group of businessmen invented a King of Carnival-Rex-to parade in the first daytime parade. They introduced the Mardi Gras colors of purple, green and gold, the Mardi Gras song, and the Mardi Gras flag.
In 1873, the first floats were constructed entirely in New Orleans instead of France. In 1875, Governor Warmoth of Louisiana signs the “Mardi Gras Act” making it a legal holiday in Louisiana, which it still is.
Most Mardi Gras Krewes today developed from private social clubs that have restrictive membership policies. Since all of these parade organizations are completely funded by its members, we call it the “Greatest Free Show on Earth”! 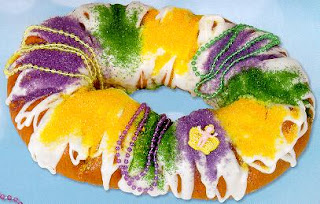 History Behind the King Cake

As part of Christian faith, the coming of the wise men bearing gifts to the Christ Child is celebrated twelve days after Christmas. We refer to this as the Feast of Epiphany or Little Christmas on the Twelfth Night. This is a time of celebration, exchanging gifts and feasting. Today, the tradition continues as people all over the world gather for festive Twelfth Night celebrations. A popular custom was and still is the baking of a special cake in honor of the three kinds called “A King’s Cake”.
Inside every cake is a tiny baby (generally plastic now, but sometimes this baby might be made of porcelain or even gold). The tradition of having King Cake Parties has evolved through time, and the person who receives the slice of cake with the baby is asked to continue the festivities by hosting the next King Cake party. 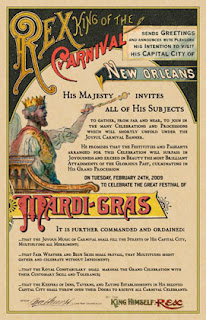 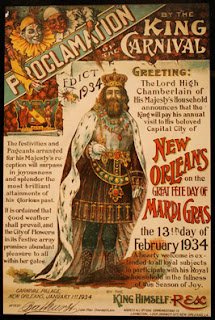 Originally, King Cakes were a simple ring of dough with a small amount of decoration. Today’s King Cakes are much more festive. After the rich Danish dough is braided and baked, the “baby” is inserted. The top of the ring or oval cake is then covered with delicious sugar toppings in the traditional Mardi Gras colors of purple, green and gold.

In more recent years, some bakeries have been creative with stuffing and topping their cakes with different flavors of cream cheese and fruit fillings. 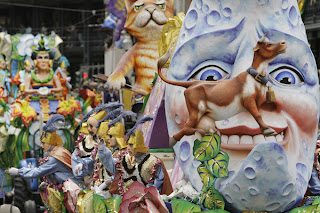 So, in Louisiana, especially, Mardi Gras season and King Cakes go hand in hand with literally hundreds of thousands of King Cakes consumed at parties and office lunch rooms every year.
Ordering King Cakes over the Internet has now become an annual tradition by consumers all around the world…and many of the bakers offer them year around. After all, you can’t have a Mardi Gras party without a King Cake.