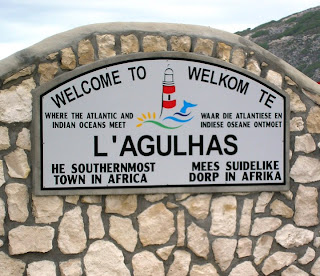 Where else would you find one of the most haunted places in the world?  L’Agulhas, the last little village situated at the southern most tip of the African continent boasts sightings of the phantom ship “The Flying Dutchman” that has inspired poets, novelists and dramatists, including Wagner’s opera “Der fliengende Hollander” and most recently the Hollywood block-buster “Pirates of the Caribbean”.
All based on stories retold by fearful seafarers as far back as the first half of the seventeenth century, who have had the misfortune to encounter her blood red sails and ghostly rigging, captained by the Devil’s advocate Van der Decken, who lashed himself to the ship’s wheel during a howling gale, ignoring his petrified crew’s please to ride out the storm and give up his obsession to round the Cape of Storms. Rigging was stripped from the ship’s masts, sails lost and the decks became slippery with the incessant crashing of the angry waves purging and dispersing with incessant mountainous swells that dwarfed the floundering craft. The manic Captain is said to have raised his fist heavenward, cursing the Creator out loud, saying that even God would not force him to change his mind as he’d made a pact with the Devil and that he was on his side. Suddenly a shaft of holy light was seen streaking from the rolling, black clouds, lighting up the deck before Van der Decken. 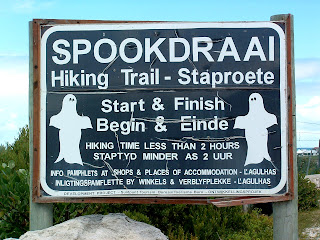 The terrified crew trembled, as there before their Captain was the incredible sight of the Holy Ghost stepping onto the deck out of the shaft of light. At the sight of the holy apparition, Van der Decken drew his pistol from his belt and fired. Instantly his arm withered and the Holy Ghost pointed his glowing finger at the incensed captain saying, ” Van der Decken, you have defied God’s wrath and now you and your crew shall sail the seas of the Benguela and Agulhas currents forever! You will never sail on calm waters, only waters swollen with the rage of gale force winds. Your thirst and hunger will be that of a castaway trapped in the Sahara desert. From now and for eternity, you and your ship shall bring misfortune on all who sight you. The Flying Dutchman shall be a pariah and all living men shall turn sail and flee at the sight of you!”
There are two hundred and fifty known shipwrecks off the coastline of L’Agulhas, – some dating back to the times of the early Portuguese exploring seafarers. To the locals, it is known as “The Graveyard of Ships” and understandably a traveller’s ultimate destination for ghostly encounters of drowned sailors or unfortunate castaways who survived the sinking of their ship, only to crawl onto the desolate shores of the Cape 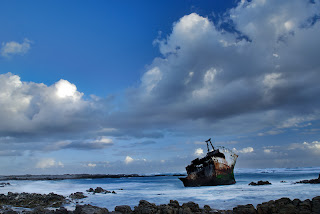 Agulhas region and die a lonely death. Local fishermen are renowned for their ghostly tales which are retold to their wide-eyed children around smoky fires on cold and blustery nights where the calls of the sirens can be heard singing the crews and their ships towards the jaws of the sharp rocks jutting angrily from the frothing waves.
Originally L’Agulhas was named “Cabo das Agulhas”. Translated, this means “Cape of Needles” and refers to the compass needle on ships and other seafaring craft. Here, at the southern most tip of Africa, no compass needle shows any significant difference between true north and magnetic north. This is the point on the African continent where the Atlantic and Indian oceans hurl themselves at one another like furious maelstroms. No wonder this is named the “Cape of Storms” and has struck fear into ancient mariners for centuries. The cold Benguela current that flows in from Atlantic and the warm Agulhas current carried from the Indian Ocean mingle at the southern most tip of Africa, L’Agulhas. Sometimes these currents reach as far as Cape Point. There is a cairn marking the southernmost point of the African continent where people from all over the world can be seen having their photographs taken to take home as a memento of their visit to the quaint little fishing village of L’Agulhas and the southern most tip of Africa. 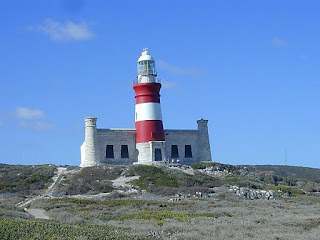 For visitors to L’Agulhas who enjoy the challenge of a two hour hiking trail and want to take the chance of perhaps encountering one or two of the more friendly local ghosts, they can walk the “Spook Draai”, (Ghosts Corner) trail. Of course, the origin of Spook Draai is as illusive as the surety of any ghost sightings. One of the phantoms of the area is a beautiful young woman who is said to have the voice of an Angel and the most exquisite slender hands. She was the survivor of a shipwreck and was washed up on shore. Later she moved into one of the many limestone caves that can be found along the Spook Draai trail where sadly she died a solitary death. However, she is not yet at rest and being of a gregarious nature, often visits the Agulhas Country Lodge and surrounding residencies with the wish for human contact. There have also been recent sightings of a headless man who walks the road at the entrance to L’Agulhas on mist shrouded nights, scaring the life out of people driving home from local restaurants and pubs.
Spook Draai is a well demarcated circular route, intended to be walked in only one direction as indicated by the markers. You can start the trail by walking in the direction of L’Agulhas village. In all, there are twenty eight markers and for the benefit oft the hiker, these points of interest are marked along the route. Before taking the hike, it is advised to collect a Spook Draai booklet from the tourism bureau which is situated at the L’Agulhas lighthouse. This booklet contains brief descriptions of each vantage point. Be sure to wear sensible hiking shoes and watch out for snakes, especially spring and summer…or you may become one of the Spook Draai ghostly statistics!