La Tomatina is a festival that is held in the Valencian town of Buñol, in which participants throw tomatoes at each other. It is held the last Wednesday in August, during the week of festivities of Buñol.
History

Changes Throughout Its History

The tomato fight has been a strong tradition in Buñol since 1944 or 1945. No one is completely certain how this event originated. Possible theories on how the Tomatina began include a local food fight among friends, a juvenile class war, a volley of tomatoes from bystanders at a carnival parade, a practical joke on a bad musician, the anarchic aftermath of an accidental lorry spillage. One of the most popular theories is that disgruntled townspeople attacked city councilmen with tomatoes during a town celebration.
In 1950, the council allowed the party to happen. The next year however it was not approved, thanks to pressure from town residents and other participants.
When the festival was finally officially sanctioned, the launching of tomatoes became inventive. Methods such as using water canons, catapults and filling of fountains of rivals became common. Between the noise and chaos, participants typically primed 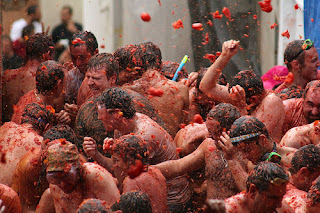 with those who were mere spectators, including local personalities. By 1957 the festival was once again banned with strict penalties, including imprisonment, threatened against those flouting the ban. In that year, the neighborhood decided to organize what they called “the funeral of the tomato”, which came in a procession carrying a coffin with a great tomato, accompanied by a band playing funeral marches along the path.
Due to local pressure, in 1959 the town finally approved the Tomatina, but imposed a rule that people could only throw tomatoes after a horn sounded and should end when it sounded a second time.
Between 1975 and 1980 the festival was organized by the ordeal of San Luis Bertran, who supplied the tomatoes, replacing the previous arrangement of participants bringing their own. The party became popular in Spain thanks to Javier Basilio reporting the issue in the RTVE Informe Semanal in 1983. 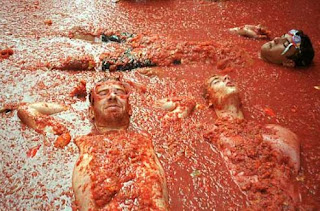 Since 1980 the City Council provides participants with tomatoes, each year a greater tonnage than the previous year. Visitors became attracted to the event and in 2002 it was declared a Fiesta of International Tourist Interest. In 2008 a soundtrack was created, the song of the Tomatina “Todo es del mismo color” created by the bunyolense rock band “Malsujeto”.

At around 10am festivities begin with the first event of the Tomatina. It is the “palo jabón”, similar to the greasy pole. The goal is to climb a greased pole with a ham on top. As this happens, the revellers work into a frenzy of singing and dancing whilst being showered in water from hoses. Once someone is able to drop the ham off the pole, the start signal for the tomato fight is given. The signal for the onset is at about 11 when a loud shot rings out, and the chaos begins. 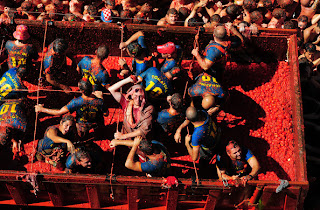 Several trucks throw tomatoes in abundance in the Plaza del Pueblo. The tomatoes come from Extremadura, where they are less expensive and are grown specifically for the holidays, being of inferior taste.  For the participants the use of goggles and gloves are recommended. The tomatoes must be crushed before being thrown so as to reduce the risk of injury. 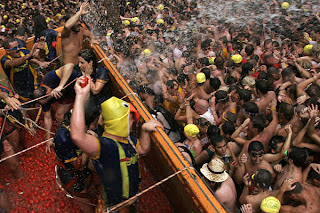 After exactly one hour, the fight ends with the firing of the second shot, announcing the end. The whole town square is coloured red and rivers of tomato juice flow freely. Fire Trucks hose down the streets and participants use hoses that locals provide to remove the tomato paste from their bodies. Some participants go to the pool of “los peñones” to wash. After the cleaning, the village cobblestone streets are pristine due to the acidity of the tomato disinfecting and thoroughly cleaning the surfaces.

Trivia
La Tomatina Buñol has inspired other similar celebrations in other parts of the world: 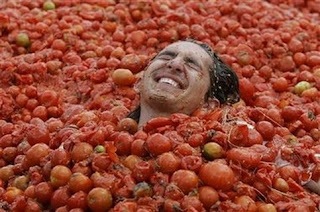 In the town of Dongguan in southern Guangdong province in China, a tomato fight is held on the 19th of October, during which they use up to 15 tons of tomatoes. 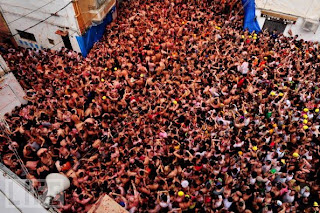 The video game company Namco included in the 6th installment of the saga Tekken fighting game, a scenario that mimics the Tomatina buñolense.