BRUCO (Caterpillar)- a caterpillar. Yellow and green with blue bands.
DRAGO (Dragon)- a flying dragon. Red and green with yellow bands.
GIRAFFA (Giraffe)- a giraffe. White and red.
ISTRICE (Porcupine)- a porcupine. White, red, black and blue bands.
LUPA (She-Wolf)-the Roman She-Wolf suckling the twins. Black and white with orange-yellow bands.
OCA (Goose)- a crowned goose with the cross of Savoia round its neck. White and green with red bands.
The “Contrade” first appeared in the middle of the 15th century to celebrate certain solemn events. They were represented by special wooden devices shaped like animals, such as, for instance, a giraffe, a dragon, a porcupine, a she-wolf, a caterpillar, a goose etc. – worked from inside by the youngsters of the districts they represented. They were called after the animals themselves. 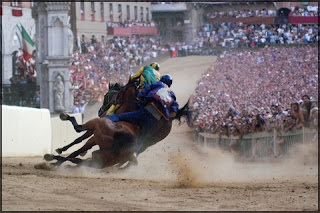 Very soon these associations began to organize shows of their own, such as: bull hunting (suppressed in 1590), buffalo races (only until 1650), donkey races and a game called “Giuoco delle Pugna”.
In ancient times (besides the usual horse-races which took place in many towns of Italy to celebrate certain particular religious and civil events) the Sienese played other kinds of games, such as: Mazzascudo (mace and shield) because the players bore maces and shields; the Giorgiani in honour of San Giorgio (battles with blunt weapons); Elmora detto dei cestarelli because the players wore certain funny baskets (cestarelli) on their heads; le Pugna (punching) abolished in 1324 because the players started throwing stones at one another, then weapons and sticks were used and a real battle ensued. To re-establish order the Bishop was compelled to descend into the square with a train of priests and monks. “La pallonata”, a game played between the “Terzi” of the town. A huge ball was thrown from the top of the “Mangia” tower by the youngsters of one of the “Terzi” into the field of their opponents. This game was played on January 13, 1555 for Biagio di Montluc, the French Marshall. 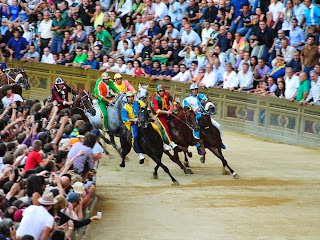 Of all these games only the Palio has survived. The preparations for this parade are slow and methodic like a liturgical procedure. Four days before the day of the Palio trials take place in the “Campo” square which is turned into a race track. A thick layer of earth is spread on the ground and a row of mattresses is placed against the walls at the dangerous corner of San Martino to protect the jokeys in case they fall.
The whole square is amazingly fit for such manifestations because its shape is that of a mediaeval Roman amphitheatre closed at the base by the straight line of the Palazzo Pubblico. Besides being semi-circular this peculiar square is also funnel-shaped like the theatres of the imperial age. Eleven streets run into it, though it is extremely difficult to percieve them from the middle of the square. All around the track, perched up against 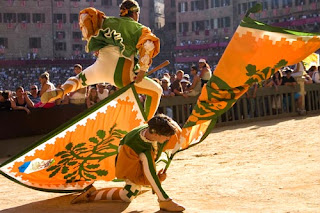 the walls of the houses, seats are arranged one behind and above the other like bleachers. Windows, balconies and loggias, too, are made ready for the visitors; 33,000 seats in all, but they are far from sufficient and are always sold out long before the day of the performance. In the centre of the square there is room for about 28,000 people to stand, but this is not enough either and the roofs, the turrets and the cornices of the old houses looking on to the square are also crowded. There are people everywhere, even in the most unlikely places.
On both the appointed days every year the “Contrade” – that is to say all the Sienese population – compete for a prize which is but a hand painted silk banner (pallium). Each “Contrada” is represented by a group of young men called “Comparsa” arranged as follows: one drummer, two flag-bearers, with their flags, one “Duce”, two grooms, one page carrying a flag with two pages at his sides carrying the emblems of the “Contrada”, the race-horse called barbero with a jockey called “barbaresco”, last the jokey who is to run the race on a parade horse called “soprallasso” followed by a groom. 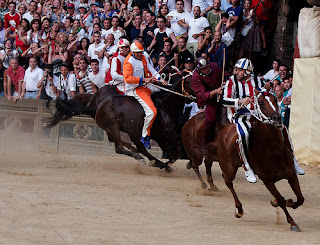 The historical parade is a lively display of rich medieval costumes which date back to the time period from 1430 to 1480; their colours are as bright as one may fancy. The procession goes winding its way round the “Campo” square in the following order: the flag-bearer of the Commune on horseback bearing the standard of Siena (the black and white Balzana) followed by his groom, a group of drummers, a group of trumpeters and musicians called “musici di Palazzo” playing the march composed for the Palio by Pietro Formichi in 1875 on their bugles, the Captains, the representatives of the “Podestà” (called podesterie), the flag-bearers with the standards of the “Terzieri” of the town and of the lands belonging to the Commune called “Masse”, the flag-bearers of the Corporations of the Arts and Crafts, the captain of the peopIe (Capitano del popolo) on horseback and a group of flag-bearers with the flags of the old Sienese Republic. 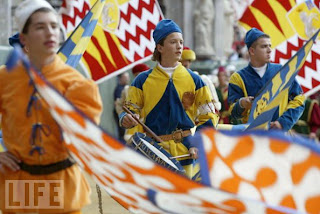 Next come the representatives of the “Contrade” called “comparse”. The first ten are those which are to run in the palio horse race; they are followed by a row of young pages bearing festoons of laurel leaves and then by the seven “Contrade” that do not run (they have no “barbero” and no jockey).
Next comes the captain of Justice (Capitano di Giustizia) riding a horse and then the representatives of the seven “Contrade” that no longer exist: Cock, Lion, Beam, Oak, Sword, Viper. Last comes the triumphal chariot (carroccio) drawn by huge oxen. In the chariot are seated the four “Provveditori di Biccherna” (administrative authority who in times of yore used to superintend public representations, along with the oriflamme of the Commune, the Palio to be awarded to the victor, and a group of trumpeters. 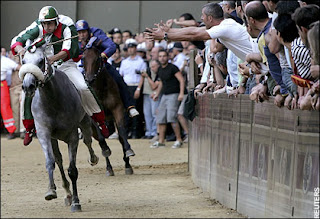 When this magnificent pageant has slowly gone round the square, all the representatives go to sit on a platform raised just for the purpose beneath the windows of the “Palazzo Pubblico”. When they have all been seated ther, they look like a strange army after some brilliant victory, or a train of heroes or of poets ready to enter Paradise. As soon as everything is quiet, the flag-bearers from all of the “Contrade” perform together with their flags in what is most commonally known as “gioco delle bandiere”. They throw them high up into the air and catch them again before they touch the ground; it is a splendid, most decorative display of colours accompanied by the beating of drums, the sound of bugles and trumpets and the chimes of the big bell on top of the “Mangia” tower; the little bell on the chariot, known in Siena as “Martinella”, is also very busy ringing. 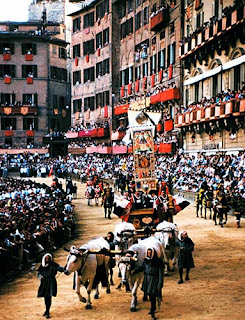 All of this is but a prelude, a time of anxiety and expectation. When at last the horses appear and the race starts, the crowd becomes delirious. The jockeys goad their horses round the square three times and the people shout as if the town were about to fall.
The spirit of Siena is in the very colours of her “Contrade” and in all the manifestations connected with each of them. First of all, the benediction of the horses and jockeys, each in the church of their own “Contrada”, early in the afternoon just before the Palio. It is this spirit that animates the whole manifestation and contributes such enthusiasm and pathos to the scene. 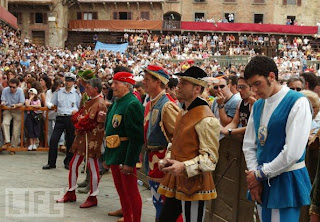 This traditional popular manifestation lasts four days (from June 29 to July 2 and from August 13 to 16) and finishes in the streets of the victorious “Contrada” where the people celebrate the happy event in a most joyous way. Winner pays all.
Whoever happens to be in Siena during these exciting days can, but join in the enthusiasm of the people for the Palio and, of course, the final victory. Visitors, in fact, often go roaming through the winding streets of the ancient town sympathizing with the “Contrada” in which they are living; they do their best to understand the alliances and rivalries between the contradas and temporarily become fervent “contradaioli” (as the inhabitants of each Contrada are called) having much at heart the health of the race horse and of the jockey.