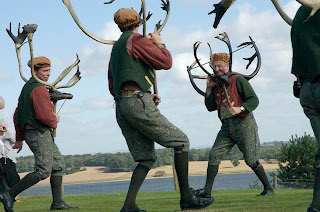 The Abbots Bromley Horn Dance is an English folk dance involving reindeer antlers and a hobby horse that takes place each year in Abbots Bromley, a small village in Staffordshire, England.

There are no recorded references to the horn dance prior to Robert Plot‘s Natural History of Staffordshire, written in 1686. However, there is a record of the hobby horse being used in Abbots Bromley as early as 1532, and it is possible that the horn dance component of the custom was also present at that time but not commented upon by the writer.  A carbon analysis discovered that the antlers used in the dance date to the 11th century – though these may well have replaced an even older set. According to some, the use of antlers suggests an Anglo-Saxon origin along with other native Anglo-Saxon traditions that have survived into modern times in various forms.  It has been speculated, for example, that the dance originated in the pagan period and was 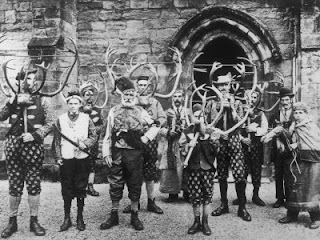 connected with the ruling dynasty of Mercia, based some 15 miles away at Tamworth, who owned extensive hunting lands in Needwood Forest and Cannock Chase surrounding Abbots Bromley. On this theory, the royal forester would have organised sympathetic magic rituals to ensure a plentiful catch each year, a tradition that survived into Christian times and gradually came to be seen as affirming the villagers’ hunting rights. Even when the lands were granted to Burton Abbey in 1004 a forester would still needed to have been employed, and by the 16th century, when the abbey was dissolved, this hereditary position bore the title “Forester of Bentylee” (Bentylee being the wooded area of the parish). From then until the 19th century the dance remained the traditional prerogative of the Bentley family, eventually passing to the Fowell family in 1914 through a marriage alliance. The Fowells continue to run it to this day.
Such an ancient origin for the dance has been doubted by some folklorists, who point out that while the reindeer antlers date to the 11th century, reindeer were long since extinct in the England and wales (and probably Scotland), and there is no evidence that any domestic reindeer herds remained at that time. Therefore, even more confusingly, the antlers must have been imported from Scandinavia at some point between the 11th and 17th centuries. This fact may lend weight to the theory that the custom originally began with only a hobby horse, and the horn dance component was added later, explaining why only the former was mentioned by 16th century sources. 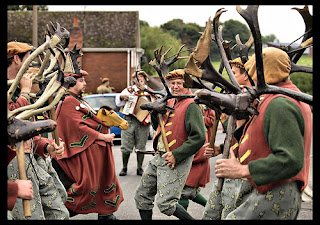 The dance was, like similar events throughout the country, temporarily discontinued during the Commonwealth years. Prior to this, according to Robert Plot, it was performed on Christmas Day, New Year’s Day and Twelfth Day, in addition to the local Wakes Monday – though upon its revival in 1660 it was confined to the latter alone.

The Horn Dance attracts a large number of visitors to the village. As well as the dance itself, Wakes Monday sees a Fair on the village green; Morris dancing; and numerous other attractions. The right to hold this Fair was granted to the village in 1221. 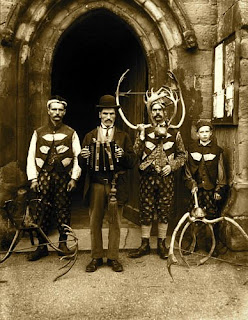 Date and schedule of performance 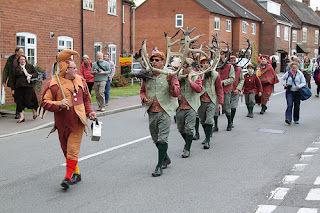 There are 12 dancers. Six carry the horns and are accompanied by musician playing an accordion (a violin in former times), Maid Marian (a man in a dress), the Hobby-horse, the Fool (or Jester), a youngster with a bow and arrow, and another youngster with a triangle. Traditionally, the dancers are all male, although in recent years girls have been seen carrying the triangle and bow and arrow.
Until the end of the 19th Century the dancers were all members of the Bentley family. The dance passed to the related Fowell family in the early 20th Century in which it remains to this day, though rising house prices has meant that none of them live in the village any longer, with many residing in nearby towns. They have been known to allow visitors to “dance in” if asked politely, and will often invite musicians and others to take part when necessary. 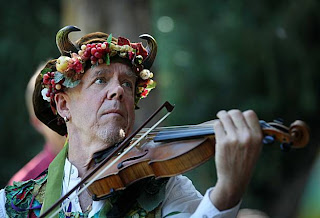 The “horns” are six sets of reindeer antlers, three white and three black. In 1976, a small splinter was radiocarbon dated to around 1065. Since there are not believed to have been any reindeer in England in the 11th Century, the horns must have been imported from Scandinavia.
The antlers are mounted on small heads carved from wood. Since 1981, the horns are legally the property of Abbots Bromley Parish Council. For 364 days a year, they are on display in St Nicholas Church. They were once kept in the main Village Hall, which is now the Goat Inn, beside the Butter Cross. An alternative set of antlers (red deer) are kept to use when the Dancers are asked, as they are, frequently, to perform outside the Parish boundaries. 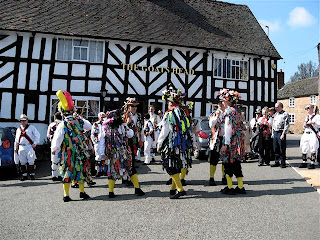 The dance itself is simple, since the antlers themselves have some weight to them and are large and bulky.
As described by Cecil Sharp, there are 6 figures in the dance. He describes the dance as being done with the participants in a single line; however, it is currently performed with the dancers in a double column.