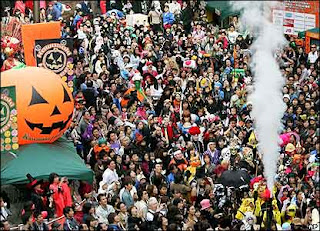 In Japan O-Bon festival celebrates the memory of the dead relatives. Food and water is placed in front of photos of the dead. Bonfires and lanterns light the spirits’ path back to earth.
O-Bon celebrated by some people from July 13-15 and others from August 13-15, O-Bon gets its name from the Sanskrit word for “to hang upside down.” It refers to a legend about a Buddhist monk who, deep in meditation, was able to “see” his long-dead mother hanging upside down in the Buddhist equivalent of hell. This was her punishment for having eaten meat during her lifetime – a Buddhist taboo – and refusing to repent of it. The monk was holy enough to go to hell and buy his mother’s passage to Nirvana with some of his own excess goodness. 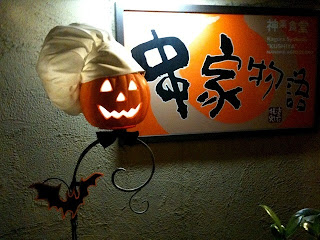 On the first day of O-Bon, people decorate their loved ones’ graves with fruit, cakes, and lanterns. On the second day, spirit altars or as they are referred to tamadana, are assembled at home: Atop a woven rush mat stand the ancestors’ memorial plaques, tempting vegetarian dishes, and cucumbers carved to represent horses on which the spirits are invited to ride. On the third day, whole communities gather for the bon-odori, a hypnotic, slow dance that moves in concentric circles or multiple lines. Hundreds of people often dance together. As evening falls, tiny paper lanterns are set adrift on river or sea: these omiyage gently light the spirits way back to the “other shore”.
Buddhist Japanese remember their dead at the time in autumn of equal days and nights. The festival that is celebrated is called Higan. It is a time when people visit the graves of friends and family who are dead. They tidy up the area and think about the dead people. 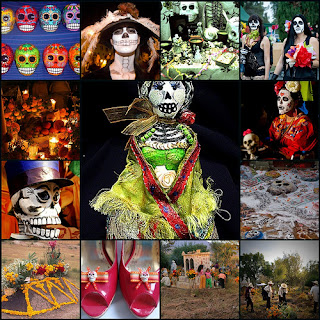 In Mexico they have picnic lunches on the graves of their relatives. As this is a day of remembrance, happiness and celebration.
They bake bread and make candy in the shape of skull and crossbones, a casket, or a skeleton.
The children run through the streets with lanterns and ask for coins.
People light bonfires, set off firecrackers, and hang lanterns on trees to guide the souls of the dead home.
In Mexico All Saints’ Day is devoted to Los angelitos – that is, all the dead children. This is a prelude to November 2’s Dia de los Muertos, Day of the Dead, a national holiday on which all the grown-up ghosts will be arriving in full force. The littler ghosts get a head start. To help them find their way back to the homes where they once lived, parents and still-living family members often shoot off firecrackers. In some parts of the country on this night they strew a path of flower petals from the graveyard to the front porch.
Mexico’s Dia de los Muertos Day of the Dead calls for happy all day picnics beside the graves of dead relatives. At home, people assemble little altars called ofrendas, stocked with the departed loved ones favorite foods and drinks, their photos, and other memories, as well as candles and pungent marigolds, a flower long associated with death.
The Mexican custom of Erecting Day of the Dead altars has caught on north of the border, where the altars serve as the focus of ancestor rituals and memorials.
In Mexico October 27 is the Feast of the Holy Souls or Fiesta de las Santas Animas, families begin the fiesta by cleaning their relatives’ graves and adorning them with pine needles and flowers. The families assemble a temporary altar near the gravesite, stocking the altars with candles and all kinds of foods such as meat, beans, chilies, salt, tortillas, fruit and sometimes alcohol. Each person in the family then takes turns in talking to the departed spirit, offering it the food and assuring it that it is loved. The ceremonies go on for several days, as every family has more than one grave to attend to. 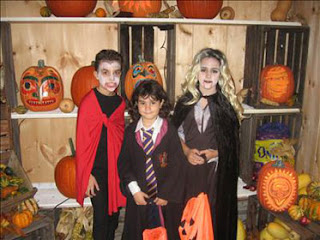 In North America people believed that it was bad luck for a black cat to cross your path. It was believed that it was unlucky for a black cat to come into their homes or travel on their ships.
In the United States trick-or-treaters are welcomed by placing lighted pumpkins known as jack-o’-lanterns in their windows.
The North American tradition of trick or treat comes from the original idea that you must be kind to dead ancestors or they will play a trick on you.
Neopagans of North America honor their ancestors on October 31. It was once believed that on this night any souls who had not yet passed into the paradise of the summer lands might return to wander the streets and visit their old homes once more.
Neopagans celebrate the festival today as a turning point between the old and the new year, as well, the date of October 31 as the gateway between the worlds. Many neopagans believe that, on the eve of Samhain, the veil that separates each world that of the living and that of the dead is at its thinnest and that on this night, there is a better chance of being successful in communicating with their ancestors. 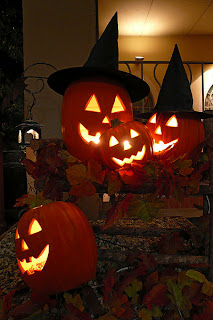 In the Philippines people light candles in the memory of their dead relatives. 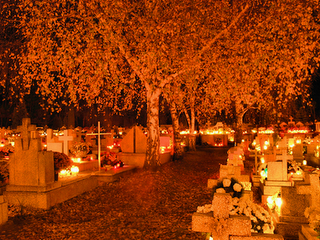 In Poland doors and windows are left open to welcome the spirits or the visiting souls.
In Poland November 1 has become a public holiday.
On All Saints’ Day Catholics attend church services in honor of the saints, the martyrs and those who have died for the Catholic faith. People may also visit their family’s graves to beautify them with wreaths and small lanterns. Sometimes a mass is said at the gravesite and the grave sprinkled with holy water.
On November 2 or All Souls’ Day, Catholics attend a special Requiem masses, where they remember those who may be close to them that have died. Prayers for the dead are said and votive candles are lit to honor their memory. 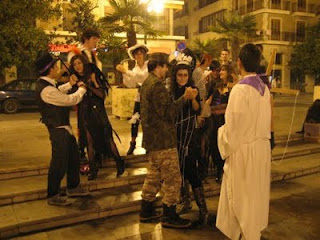 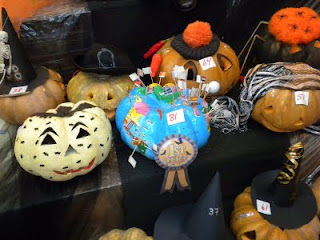 
Parentalia the Roman holiday dedicated to honoring dead family began precisely at the sixth hour on the thirteenth day of February and lasted a full nine days thereafter. These dies parentales or in English parental days, were not a spooky time for the average Roman citizen. Rather, these were days of obligation and feasting, quiet and respectful, introspective, like a wake. During the Parentalia, all temples were closed, weddings were forbidden, and governmental magistrates uncharacteristically appeared in public devoid of the insignia of their office. People visited their parents’ and other relatives’ graves, bringing offerings such as milk, wine, honey, oil, and spring water. Some brought sacrificial blood from the bodies of black animals. They decked the graves with roses and violets. “Dining with the dead” at the grave site, the celebrant would offer the traditional greeting and farewell of the holiday: “Salve, sancte parens“, “Hail, holy ancestor.”
The Vestal virgins, the priestesses who tended the goddess Vesta’s shrine in the Forum, performed rites of their own at the Parentalia. The senior Vestal paid a ceremonial visit to the group’s “parental” tomb – that of the early Vestal, Tarpeia.
On May 9 is the Lemuria a festival held to remove the more hungry ghosts or Lemures. 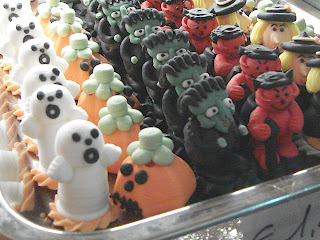 The Lemuria is a festival held for homeowners to rid their homes of resident lemures. A celebrant would walk through the house barefoot at midnight walking from room to room with one hand upheld in the fig gesture, which is the thumb held between the second and third fingers. The celebrant’s mouth would be filled with dried black beans, which he would spit out one by one as he walked. The beans were used as ghost bait. As he walked he would spit one out and say the chant nine times: “With these I redeem myself and mine.” The idea was that the lemures would be following him, eating the beans that had been spat out by the celebrant. While the celebrant was walking around with the ghosts following him people were not to look back during the ritual. Once the celebrant had come full circle, he would wash his hands thoroughly, then he would beat brass pans together, making as much noise as possible so as to bid the lemures good-bye. 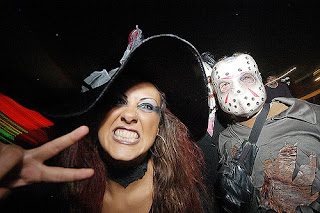 A festival held called Feralia is much like the Day of the Dead ceremony. The name feralia comes the verb ferre meaning to carry, or to ferry.
The Roman families would go to the ancestral graveyard, ferrying offerings. The reasons was that they believed the ghosts were hovering around the graves, so they take food to extinguish the pyres.
Once the ancestors were honored and fed, comes the ceremony Caristia from the word Cara meaning dear. This was a holiday to re-affirm, a day of affectionate family reunions.
All fighting was forbidden, old feuds would be forgotten, and sibling rivalries would have to be set aside. 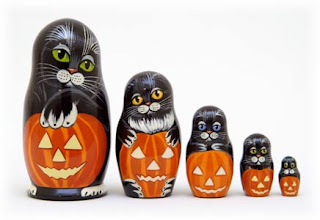 In Russia the blue cat is said to bring good luck. Blue cats such as Russian Blue, British Blue and Burmese. 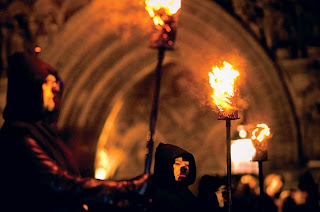 In Scotland the children cut scary faces into hollowed-out turnips, large rutabagas, or potatoes and inside of them they place a candle inside.
In Scotland they continued to practice their deep-rooted, ancient pagan rites well after the arrival of Christianity in the middle of the sixth century. The Church fathers had become concerned that the popularity of non-Christian festivals was growing at the expense of Christian holy days.
During the ruling of the Popes, everything was the same as England and Ireland.
In Scotland Soul Cakes were known as Dirge Loaves and were flat, round buns of oat flour.
Scottish superstitions ran deeper and darker than most. In memory of the fact that Scotland had been the only country to burn to death its supposed witches, children in Aberdeenshire would run around their villages, banging on doors and shouting. This practice continued until the early twentieth century. 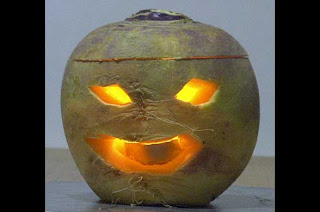 Effigies of witches were burned on the Halloween bonfire. A dummy of an old woman called the shandy Dan was wheeled in a cart to the center of a large gathering of villagers and then tossed onto the fire with much celebration.
Children once also enjoyed throwing cabbages and turnips at doors at Hallowe’en time.
They also smashed bottles near windows. 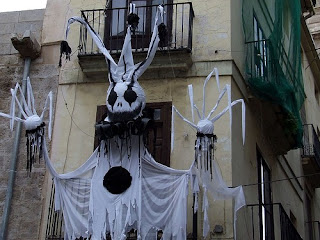 In Spain the black cat is considered to be bad luck, especially if you let it cross your path, come into your home or even onto your ship. In Spain also a special pastry known as the Bones of the Holy is eaten on this day.
In Spain November 1 has become a public holiday. On All Saints’ Day Catholics attend church services in honor of the saints, the martyrs and those who have died for the Catholic faith. People may also visit their family’s graves to beautify them with wreaths and small lanterns. Sometimes a mass is said at the gravesite and the grave sprinkled with holy water.
On November 2 or All Souls’ Day, Catholics attend a special Requiem masses, where they remember those who may be close to them that have died. Prayers for the dead are said and votive candles are lit to honor their memory. 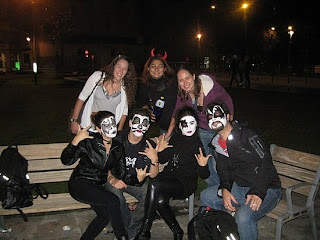 March 13-19 in Spain is Las Fallas which is in honor of St. Joseph whose feast day is on March 19. There are fireworks, bullfights, music, costumed revelers and parades. Giant models of people or papier-mâché effigies called ninots are stuffed with fireworks and burned.
The bonfires and burning of effigies is done to “blazing away” the last vestiges of winter and welcoming the glow of the summer Sun.