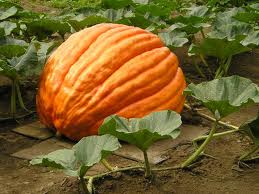 A growing number of people in Berkshire County and the surrounding areas have been visiting their back yards at the crack of dawn and in the dark of night on a regular basis. Some wear headlamps.  Some bring blanketsThey range in age from kindergarteners to grandfathers. And they’re all after one thing: giant pumpkins.
Phil Daignault of Hinsdale started down the garden path with just a seed of an idea and a question, “Can I actually do it?” He needed to know, and now his interest has produced a source of fascination for his whole family.
Some giant-pumpkin growers spend thousands of dollars and some spend a few hundred on what many refer to as their obsession. Its roots may have begun in Canada, with a man named Howard Dill, and the craze appears to have spread from Canada to Australia and almost every continent in between over the past 20 years. 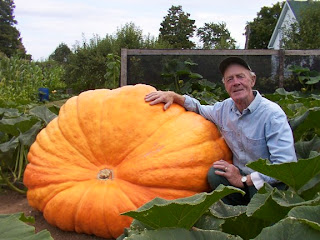 In 1996, Berkshire County growers formed their own self-help group. Dues are $10 a year. They meet once a month for seven months. Their first meeting is in March and their last is in September. They buy their supplies in bulk to save money and share their ideas, advice, knowledge, equipment and muscle freely.
To top it all off, this down to earth group has no desire whatsoever to find cures for their particular predicaments. They are carving out a way to enjoy themselves and they’re having too much fun to stop now. In fact, they invite everyone to join them in their gigantic passion.
“It’s something the whole family can become involved in and have fun with,” Daignault said. 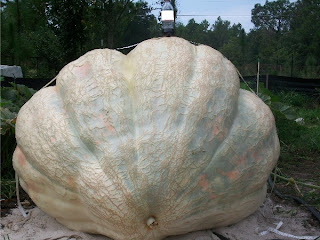 He and other growers admit it is a huge responsibility. From 5 a.m. feedings and warming blankets to better methods of providing important vitamins and minerals, to finding a dependable, experienced babysitter if they need to go out of town, they are all putting their hope, faith and best efforts into growing the healthiest, strongest, and of course biggest giant pumpkin they possibly can.
First prize in some contests can go as high as $35,000, with bonuses from sponsors like Coca-Cola. Some contests are more modest, such as the Sept. 25 event at Whitney’s Farm stand in Cheshire, which drew 25 entrants – nine in the under-18 category – where first prize was $200.
Joe Goetze, of Pittsfield, was the big winner that day with an 846-pound pumpkin. Five-year-old Casey Hopkins won in the children’s category with a 474-pound pumpkin of her own. 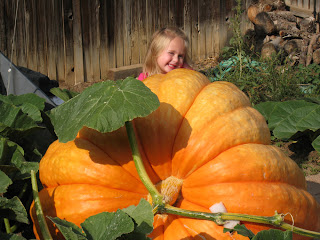 Goetze had a larger pumpkin in his backyard patch, which he harvested on Oct. 1 for the Topsfield contest. The Topsfield Agricultural Fair is the oldest fair in America, established in 1818. Topsfield’s biggest pumpkin contest started in 1984 with just 16 entrants and a winner of 433 pounds.
Goetze won first prize at Topsfield in 2000 with a 917-ound pumpkin – just 2.8 pounds heavier than the second-place pumpkin. He did not fare as well this year, coming in fifth with an even larger pumpkin weighing 1,124.8 pounds. Another member of the Berkshire Giant Pumpkin Growers Association, however, Bill Hopkins, (Casey’s dad) also of Pittsfield, placed third with a 1,170.6-pound giant pumpkin. Steven Sperry of Johnston Rhode Island was the 2004 giant winner with a 1,253-pound pumpkin, and Fred Macari of Coventry, R.I., placed second with a 1,173.4-pound pumpkin. 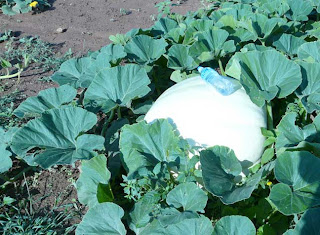 But none of this year’s hopefuls beat the world record of 1,337.6 pounds, grown by Charles Houghton of New Boston, N.H., in 2002. Maybe next year.
Daignault and his wife have both won at Topsfield. In 1996, the first year they went, his wife, Joan, won with a 746.8-pound giant. They met Senator John Kerry, who was attending the fair that year. That was a big year for the Daignault’s three sons as well. Their mother, sure she had no chance of winning as a first-time pumpkin grower, had promised that if she won, she would buy them motorcycles with her winnings. Jon, now 16, Bryan, now 13 and Matt, now 11, much to their mother’s chagrin, well remember that promise.
The Berkshire Giant Pumpkin Growers do not have a full-time fundraiser, so their president, Goetze, who works full-time for the town of Lenox, was able to find only one sponsor for the contest held at Whitney’s this year.  But that was enough. Steve Garrity of L.B. Corp., in Lee, sponsored the local event. The growers hope that, as interest spreads, more sponsors will follow suit. 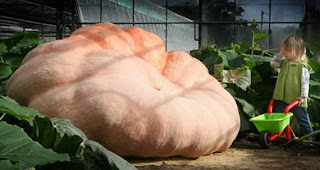 Nancy and Chris Fischer of Averill Park, N.Y., who attended the contest at Whitney’s, are also members of the Berkshire group but are ineligible to win the Topsfield contest, since New York is not part of New England. The Fischers’ pumpkins were the shiniest at Whitney’s, and Nancy Fischer shared their secret: “a weak solution of bleach to clean it and Lemon Pledge to shine it,” she said.
Chris Fischer’s pumpkin weighed more than his wife’s this year, so she had to buy him dinner. She donated her pumpkin to a local Cub Scout group, which is selling guesses on its weight to benefit the Hunter Dobert Medical Fund. Dobert has leukemia.
The challenge to grow giant pumpkins is time consuming, intensive and rewarding but can sometimes be downright disappointing. 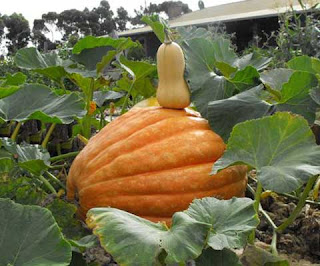 “There‚s a lot of luck involved, and my family and I have been extremely lucky,” Daignault said, “You can do everything right and things can still go wrong.”
His family has had pumpkins rot from the inside from too much watering. One hailstorm can destroy a season’s work; too much rain won’t leave enough time to fertilize, and drastic changes in the weather can cause the pumpkins to split and explode.
Patrick Walsh, 17, a Pittsfield High School student and 4-H Club member, had his crop destroyed the year when his uncle’s cows got into his pumpkin patch to have a snack. Walsh’s passion for pumpkin growing started at his grandparent‚s farm in Washington but spread to his own back yard, which is a plus, according to Walsh, because “There’s less lawn to mow now.” 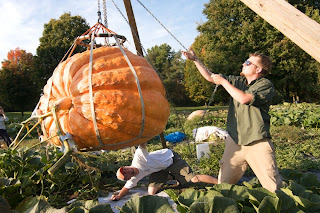 One of the Berkshire Giant pumpkin growers, Dan Hajdas, also had some bad luck this year. As workers prepared to load his giant for Topsfield, they found a hole in the pumpkin, which disqualified it.
“The agony of defeat,” Daignault sympathized.
The year one of Daignault’s giants was to travel to New York City for carving, it cracked right before the trip and was unusable.
“They were going to pay $1,000 for it,” he said with a grimace. 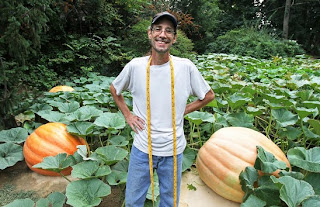 At the end of the growing season and after the contests, the Daignaults usually give their pumpkins away, carve them into giant jack ‘o lanterns or parboil them and freeze them for pumpkin pie – a lot of it.

“It takes about 12 hours and a lot of freezer space to cook and store one of the giants,” Daignault said.   “They have a coarser texture, but they are just as sweet as field pumpkins. The seeds can be dried for snacks too, though they have fewer than you would think for something that big – about 100 per pumpkin.” 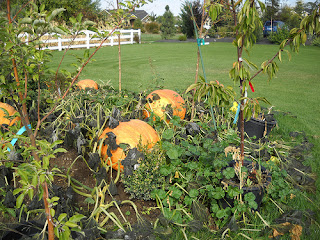 Daignault applies his success with giant pumpkin growing to life:

“You can do anything if you work hard at it and want it to happen bad enough,” he said. “You could spend as much raising pumpkins as you do raising kids, but kids are easier. The most important thing to remember is to make it fun.”
The generous, friendly growers said they have learned through their giant-pumpkin experiences that you will reap what you sow, and they are grateful for the chance to share the harvest.