The 2017 running of the annual Glenbeigh Horse and Pony Races took place on Rossbeigh Strand from August 25th to the27th. The races will be the centrepiece of a weekend festival. This years live band is the world renowned DEUCES WILD who will take to the stage on Saturday Night. Race dance music on the Sunday night is in “Linda Ryan’s”. The local pubs of the area are also playing their part, with fantastic nightly entertainment in “The Towers Hotel”, “Ashes Bar”, “The Red Fox Inn, and “Linda Ryan’s”. The Opening ceremony will be held on the Friday night with the inauguration of the Festival Queen. This year we will decide on the festival queen at the Red Fox Inn on the opening night. 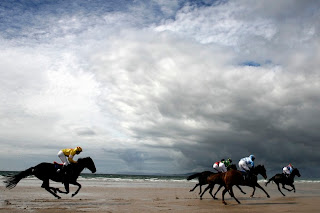 The Glenbeigh Races were first held on Rossbeigh Strand in 1924. However this was to prove to be a costly venture as the local Garda Sergeant, a Mr. Scannell summonsed the organisers to court for their failure to have the required permit. The four people summonsed were: 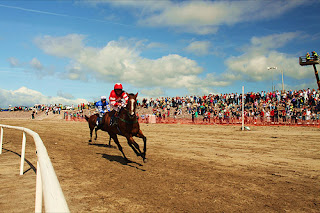 For this they were fined £80, a huge sum of money then, later reduced to £20, still a considerable amount of money. Coming close to the ending of the divisive Civil War one can speculate that there might have been differing attitudes to the legitimacy of the administration of the legal remit involved. Needless to say, having suffered such penal penalties there were no further attempts to host the races for quite a while.
It wasn’t until 1957, that another attempt was made to host racing in Glenbeigh. 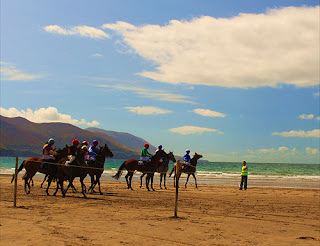 Amongst the organisers were Patrick Clifford and Johnny O’Mahony, and they are still today active and involved the organisation of Glenbeigh Races. Over the next number of years, Glenbeigh began to become established as a holiday location, helped by the growing international reputation of the Towers Hotel, and the races held in late July / Early August grew to be the centrepiece of a festival that stretched to over ten days. Indeed, the hotel proprietor at that time, the larger than life Ernie Evans used to host a party in his house at Rossbeigh on raceday which became the place to be for those who perceived themselves to be “celebs”.
Initially a one day event, the Glenbeigh Races became a two-day meeting before reverting back to one day. One year, the organisers even attempted to host jump-racing, but this proved to be a disaster as horses cannot get enough grip on the hard sand of Rossbeigh to enable them to jump properly, and all that resulted was a series of 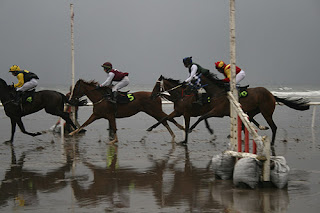 refusals, unseated riders and horses running out. Another less than successful innovation was the introduction of Sulky Racing (Trotting Races where the horses pulled a small lightweight cart or gig, also known as Standardbred Racing). While the surface was in this case ideal, the public were not interested and despite the popularity of this sport in West Cork, the experiment in Glenbeigh was abandoned. However by the mid 1970’s interest in the Glenbeigh Races was dwindling, largely brought about by the small number of horses participating, and the uncompetitiveness of the racing. In what was to prove to have disastrous consequences, there were no races held in 1978, so when racing was scheduled for 1979, the Public Liability Insurance Premium jumped to £9000 – because no premium was paid in 1978, a new policy was required, and the old rate was lost. For that year the London-Glenbeigh Association paid the premium, but with such unsustainable costs for Public Liability Insurance, the races ceased. 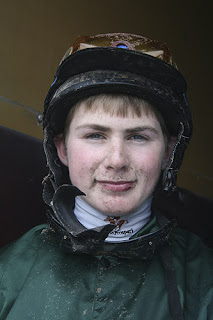 In 1996 the Glenbeigh Races were resurrected following the negotiation of an umbrella insurance policy that enabled all Horse and Pony Racing throughout the country to avail of Public Liability Insurance at reasonable cost. Under the guidance of people such as Pat and Joan Griffin, Johnny O’Mahony, Patrick Clifford, Paddy Finn and Brendan Sweeney, and backed by the very generous sponsorship of many benefactors, the races grew from the initial one day, to become a two day meeting. Glenbeigh Races is now one of the biggest race meetings on the Horse and Pony Racing Calendar 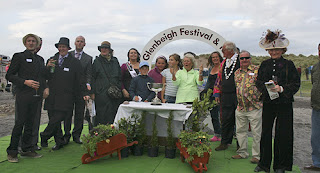 Throughout the evening: Bouncy Castles, Face Painting,
All in the Football Field.

10.00pm: The Red Fox Inn – The Real Deal followed by DJ till late
Festival Grand Opening
The Red Fox will again host the official opening of the Glenbeigh Festival, where our Honoary Lifetime Festival President John Griffin will hand over the chain of office to our New 2017 President Tony Hayes with live music by ‘The Real Deal’ followed by the selection of the 2017 Festival Queen and DJ till late