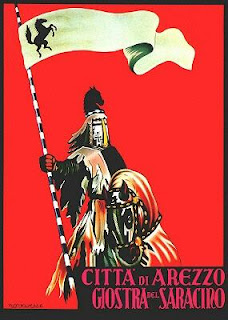 Tuscany draws you with an irresistible air to Arezzo transforming a land into a theater filled with a lifestyle of tradition, culture and cuisine. Arezzo which is about 80 kilometers from Florence hosts the Giostra del Saracino or the joust held at the Piazza Grande. This medieval festival displays facets of its old world charm, its famous history, tradition and its tasteful cuisine. 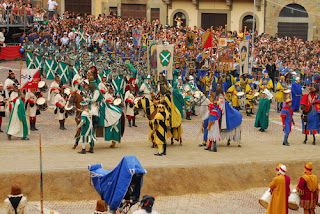 Held on the first Sunday in September, the procession of La Giostra del Saracino winds its way right down to the Piazza Grande. Originating from the ancient Crusades, this Saracen joust began in the Middle Ages. The Christian Crusaders battled with the Islamic tribes or the Moors of the North African Arabs in an attempt to drive them out of Europe. This Baroque joust started between the 15th and the 16th centuries and gained popularity. But during the 18th century, the royal air that surrounded it declined and lost its notoriety. A brief spell of fame enveloped this game during the Romantic period. With a culture of tradition, the Giostra del Saracino was re-established as a historic event in 1931 with its original 14th century ambience. With the spirit of competition and joy, the joust also takes place when dignitaries and princes visit the city and during important functions, carnivals and weddings. 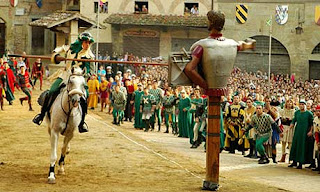 Held twice a year, La Giostra del Saracino is also enacted on the third Saturday at San Donato as well as the first Sunday in September at Arezzo. Exciting and exhilarating, this medieval joust starts with an air of anticipation as the procession with eight knights clad in their chain armors canter past on their horses. The knights represent the four quarters of the old city. They are known as the Porta Crucifera in red and green, the 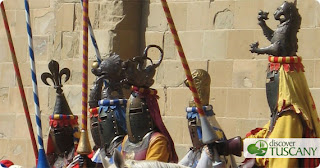 Porta del Foro in yellow and crimson, the Porta Sant’Andrea in green and white and the Porta Santo Spirito in yellow and blue. The parade follows with 311 people dressed in the 14th century apparel and 31 horses trotting along with their riders with multi-colored flags held by the flag bearers. The joust begins with a traditional ritual with the Bishop blessing the armies on the steps of the Cathedral. Then the ‘Araldo’ reads the ‘Disifida di Buratto’, which is a poetic recital, dating back to the 17th century. A greeting is extended to the knights and the authorities who are in charge. A musical chorus ‘Inno del Saracino’ is sung by the Gruppo Musici and a final ‘go ahead’ signal is given by the Magistrates to start La Giostra del Saracino.

The aim of the joust is to hit the shield held by a wooden effigy of a Saracen. The Maestro del Campo or the Master of the Field gives the signal for the knights to race on their mounts towards the wooden effigy. If the knights miss the target, the Saracen effigy portraying the ‘Puppet King of the Indies’ swings a ball with spikes on it that hits the knight if he is not careful. The crowds cheer as the knight from their quarters finds 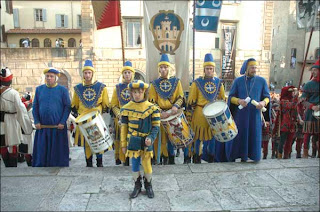 his mark, but lapse into silence when he does not and turn to distracting the knights from the other quarters when it is their turn. The knights of the joust who hit the shield of the effigy win the most number of points and go on to winning the prize of the Golden Lance. Arezzo takes you back into the past with its memorable traditions and a culture that traverses the ancient ages