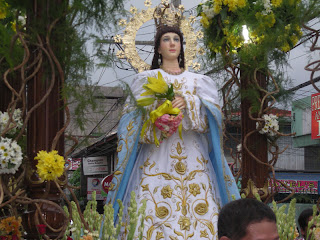 Flores de Mayo (English: “Flowers of May”) is a Catholic festival held in the Philippines in the month of May. Lasting for a month, it is held in honor of the Virgin Mary. The Santacruzan refers to the pageant on the last day of Flores de Mayo, held in honour of Reyna Elena and Constantine finding the True Cross in Jerusalem.
EtymologyThe name is derived from Flores, the Spanish word for “flowers”. Also known as “Flores de Maria” (“Flowers of Mary”) or “Álay” (Filipino for “offering”), the term refers to the festival as a whole. It was believed that “Flores” (short term for Flores de Mayo) originated in 1865 from the town of Malolos, Bulacan, when the young girls would make a floral offering to the Virgin Mary in the parish church. 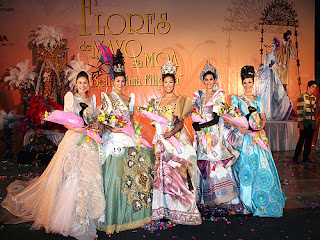 In the Bicol region, especially in the locality of Barangay Sabang in Naga City, the Flores de Mayo is held every Wednesday and Saturday of May. It is headed by the Legion of Mary, Praesidium Cause of our Joy, with the last day called as “katapusan“. The ritual is started with the rosary, with every decade followed by Spanish Marian songs.
The traditional “MARIA” with its respective meaning is said after the recitation of the Spanish Salve and the litany. After the ceremony, simple snacks are given to the children who attended the devotion. Alabasyon is the term for the prayers sung in honour of the Holy Cross. 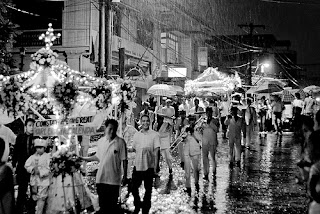 In the Tagalog region, this custom and celebration started after the proclamation of the dogma of the Immaculate Conception in 1854 and after the publication circa 1867 of Mariano Sevilla’s translation of the devotional “Flores de Maria”(“Flowers of Mary”), also known by its longer title “Mariquit na Bulaclac na sa Pagninilaynilay sa Buong Buan nang Mayo ay Inihahandog nang manga Devoto cay Maria Santisima” (“Beautiful Flowers that in the Meditations in the Whole Month of May are Offered by Devotees to Mary Most Holy”).

A Sagala is a religio-historical beauty pageant held in many cities, towns, and even in small communities throughout the Philippines during the month of May. One of the most colourful aspects of this festival, the pageant depicts the finding of the Holy Cross by Queen Helena, mother of Constantine the Great. Many movie and television personalities participate in the events and are featured in major sagala.  This festival was introduced by the Spaniards and has since become part of Filipino traditions identified with youth, love, and romance. 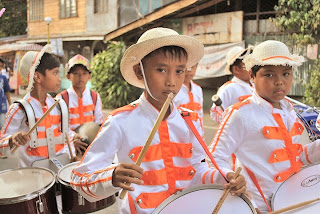 Prior to the Santacruzan, a novena is held in honour of the Holy Cross.
The procession itself commemorates the search of the Holy Cross by Reyna Elena and her son, the newly-converted emperor Constantine. After the Holy Cross was found in Jerusalem and brought back to Constantinople, there was a joyful celebration for thanksgiving.

Order of the processionThe participants of this colourful pageant would follow this typical arrangement:

1. Matusalém (Methuselah)- bearded and bent with age, he is depicted as riding a cart and looking preoccupied with toasting some grains of sand in a pan over a fire. This is a reminder that everything in this world is passing and will end up like the dust which he is toasting.

2. Reyna Banderáda (Queen with a banner)- a young lady dressed in a long red gown carrying a yellow triangular flag. She represents the arrival of Christianity.

3. Aetas – Represents the animist Filipinos who have settled the islands prior to Christianisation by the Spanish. 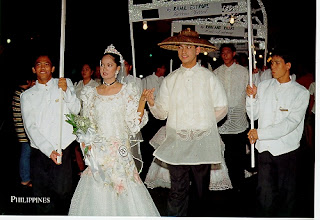 4. Reyna Móra (Queen Moor) – Represents the Filipinos who converted to Islam, which arrived in the Philippines two centuries before Christianity.

5. Reyna Fe (Queen Faith) – symbolises Faith, the first of the theological virtues. She carries a cross.

8. Reyna Abogáda (Queen Lawyer) – the defender of the poor and the oppressed, she wears a black graduation cap, gown (toga), and carries a large book. She may also be a representation of Mary, Helper (Advocate) of Christians. 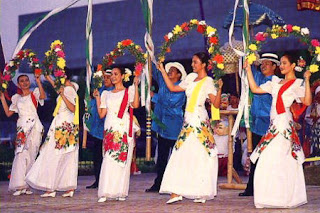 9. Reyna Sentenciada (Queen Sentenced/Convicted) – has her hands bound by a rope, she stands for the Early Christians, especially the virgins, who were martyred for the faith. She is accompanied by two Roman soldiers.

10. Reyna Justicía (Queen Justice) – a personification of Mary as the “Mirror of Justice”, one of her titles in the Litany of Loreto. Her attributes are a weighing scale and a sword.

11. Reyna Judít (Queen Judith) – represents the biblical widow Judith of Bethulia who saved her city from the Assyrians by slaying the cruel Holofernes. She carries the head of her victim in one hand and a sword in the other. She is also known as Infanta Judith. 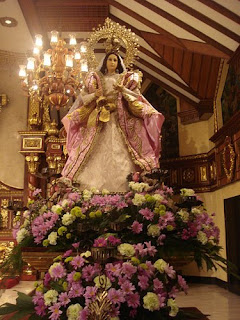 12. Reyna ng Sába (Queen of Sheba) – represents the Queen of Sheba, who visited King Solomon and was overwhelmed by his wisdom, power, and riches. She carries a jewelry box.

13. Reyna Éster – the Jewish queen of Persia who spared her people from death at the hands of Haman through her timely intervention with King Xerxes. She carries a scepter.

14. Samaritána (The Female Samaritan) – The woman with whom Christ spoke to at the well. She carries a jug on her shoulder.

16. Tres Marias (The Three Marys)- each Mary holds an attribute associated with her:
a. Mary of Magdala – a bottle of perfume;
b. The Virgin Mary – a handkerchief;
c. Mary, the mother of James – a bottle of oil. 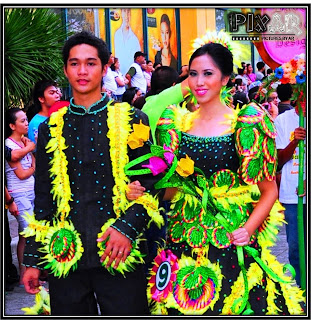 17. Marian – each figure in this group alludes to a title of the Virgin Mary or to a figure associated with her. 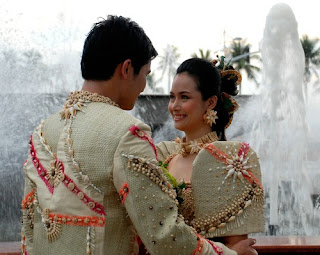 18. Reyna Eléna (Queen Helena) – the last member of the procession, she represents Helena of Constantinople who found the True Cross; this is alluded to by her attribute, a small cross or crucifix that she carries in her arms. This considerably prestigious role is usually awarded to the most beautiful girl participating in the pageant. In some communities, the identity of the woman who will portray the Reyna Eléna is kept a secret until the day of the procession.

a. Constantíno – the escort of Reyna Eléna; traditionally a young boy representing the Emperor Constantine.

The procession is accompanied by the steady beat of the rondalla, playing and singing the Hail Mary (“Dios Te Salve”). The devotees walking with the procession hold lighted candles in their hands and sing the prayer as they go along. 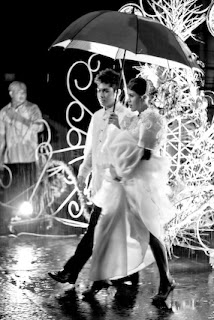 After the procession, there is a pabítin that serves as a culminating activity for all the children to enjoy. A Pabítin is a square trellis to which goodies (candies, fruits, small trinkets, etc.) are tied with strings. This trellis in turn is tied to a rope and is suspended on a strong branch or pole. Children then gather under the trellis as the it is slowly lowered. They then jump as high as they can to try to pick the goodies while someone jerks it up and down repeatedly until all the goodies are gone.
It is customary for males attending the Santacruzan wear,  to the traditional Barong Tagalog and that the females wear any Filipiniana-inspired dress.