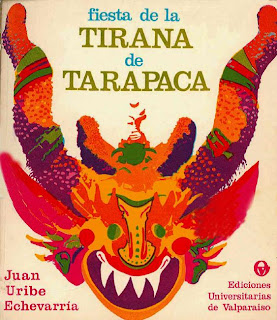 According to the legend, Diego de Almagro in his route towards the discovery of Chile from Cuzco took in his retinue to a incaico prince captive call Huillac Huma and that was the last priest of the cult to Inti. Next to him, her beautiful called daughter Ñusta went.
When the army was near the present town of Goad, many of the prisoners Incas fled towards Pampas of the Tamarugal, among them, Ñusta Huillac and its father. Refugees in the forests of tamarugos, Ñusta Huillac organized a rebellion to restore the power of its nation, being arrived to be feared so much for its enemies named who it like the “Tirana of the Tamarugal”. 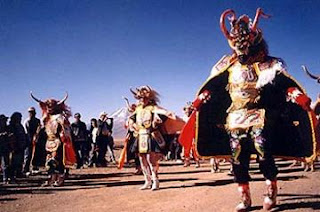 A day Portuguese Basque call arrived an expeditionary young person from Almeida that was lost its route towards the mythical “Mine of the Sun”. The sling between the beautiful queen and the Portuguese was immediate. When its relation was open pie, both were condemned until death. Almeida, as a form of which their love is eternal, convinces to Ñusta Huillac so that it is baptized thus and after the death, would appear again in further on and would live united for always. Both are shortages in the ceremony and are assassinated by the native ones.
In 1540, it passed through the town of “the Tirana” the friar Antonio Rendón, finding a cross, and as it forms of homenajear to these young people, a chapel under the name of “Our Lady of the Carmen of the Tirana” is constructed in the place. 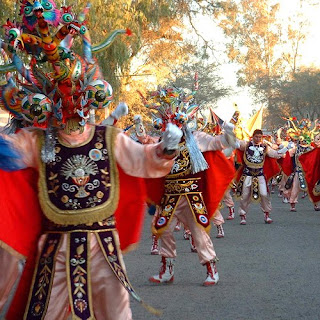 Celebration of the Tirana

The Celebration of the girl is an Andean festival related to the tie Pachamama the Virgin of Copacabana, since the works farmers. His origin like celebration is miner created by the workers aymarás, Peruvian Bolivians and who worked in the mines of copper and silver in Huantajaya, Santa Rosa and Collahuasi and arrived at San Lorenzo de Tarapacá like workers of the saltpeter. In century XIX the celebration was redefined with the salitrero height and it was celebrated the 16th of July in Pampas and the 28th of July in Iquique. By the end of century XIX, after the War of the Pacific, the celebration was celebrated in diverse dates: 6th of August for the Bolivians, 28th of July for Peruvian and the 16th  of July for the Chileans. 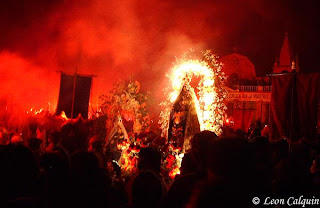 The diverse groups of dancers who went to solemnize the celebrations of the Carmen of the Tirana, returned the day before yesterday of Almonte Well, in a convoy of 19 cars. Just arrived they say that the concurrence that attended the celebration passed it pleasantly, then, aside from the religious ceremonies that ilustrísimo celebrated Mr. Obispo, the devotee ones and the profane ones are past true days of wide field enjoying to their […] the preparations for the next festivals of the 28 July, follow Pampas in his point. In the office Rosary of Huara a great dance is prepared for which already they have been distributed more than 100 invitations. Equal manifestations are also prepared in other offices of the environs of Huara. It seems, then, that next the 28 of July will be celebrated noisily by Peruvian and Chilean, in amiable partnership, that doubtlessly will contribute to erase the harshness of the past, honoring this common date to all Latin America.

Pepe Hillo. Newspaper the National, Friday 24th of July of 1903

Towards 1910, like part of the chilenización of Tarapacá, a unique day the 16 of July is included this new festival in the Chilean calendar evoking to the Virgin of the Carmen employer of the Army of Chile.  Peruvian and Bolivian brotherhoods was moved of the celebration as of 1911, granting to the “Chinese dance”, the oldest one of the Chilean dances of the Tirana (founded on 1908), the right to remove to the Virgin during the procession. As a celebration,  until 1917,   were separated of the authorities of the church. He was the then bishop Expensive Jose Maria who approached the dances the catholic rite. 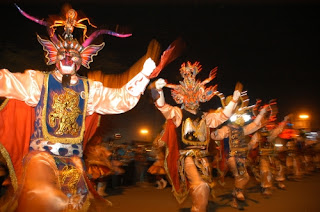 The construction of the church of the Virgin of the Carmen in the place Arica de Iquique in 1933, initiative of the Clarisa brothers, Alexander and Luis Gamboni, transferred the celebrations of the desert to the coast giving origin to the Celebration of “the Small Tirana”, which is realised immediately after the Celebration of the Tirana (called “the small Tirana”).

Some of most important are: 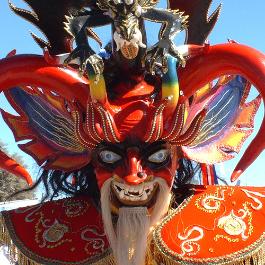 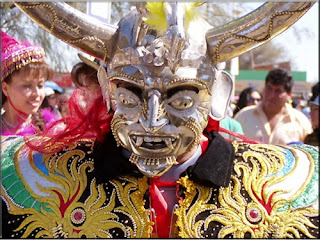 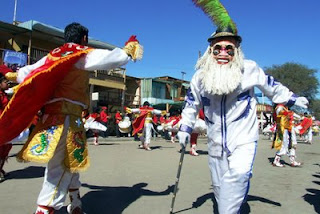 Of step or pitucos: This is a solemn, slow dance and a little funeral, in which dance to the rate of a march with the straight chest and the head in stop, the dancers realise crossings from a row to another one to the rate of the big drums or drums and boxes, these dances can be mixed or of a single sort, the typical suits of this dance is a straight suit of two or three bellboys in case of the men, who can be of any color (preferably dark) and in the case of the women is a suit of two pieces made up of a skirt until the knees and a jacket similar to the one of the man but with another cut, both use a tape crossed to the chest and a rose in the arm. 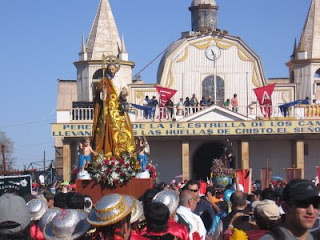 Of Jump: It shows this us the slaves jumping and celebrating its liberation, the rate that is used in this dance is denominated like two by three (2×3) in which is in one fourth two times and in the other half of fourth three more expresses are included, the suits of this brotherhood are of strong colors (generally white or tonalities of this) having patalón, blouse or shirt, wraps or belt and in some cases jackets or small layers that arrive until the waist.

The celebration they attend originating faithfuls of diverse parts of Chile, Peru and Bolivia.   When arriving at the town, the pilgrims sings with joy, diverse songs, like the following one intoned by faithfuls of the north of Chile:

Natural, déjenos fields to happen,
because your nortinos come to dance.
Abránse the streets, dénnos the way,
because we already arrived at our destiny 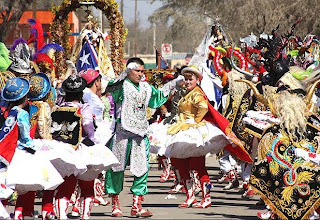 When arriving at the town, the dancing religious brotherhoods initiate their tributes, of a one through a greeting in the same place known like “the Calvary”. Thus, the religious protocol of the celebration continues in the temple, with the traditional songs and dances, greetings and processions. In the temple first it is the greeting to the Greater Altar of the virgin. In individual form or small groups, the pilgrims realise diverse sacrifices to fulfill their offers or requests, being the most popular the one to arrive at the sanctuary crawling or made kneel.
When the clock marks the 00:00 of day 16th of July, fireworks explode and the celebration reaches its maximum point in music, dance and songs to celebrate the birthday of the Virgin. Gallery of Photos is what is called “the Eve”. In the place, a misa with all the population of the place is celebrated singing the dawn. 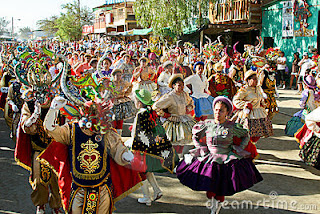 After to finish to the misa of Eve the dancers you begin its goodbyes, in which it is sung and it danced to the Virgin for the last time until the other year, after to take leave of the image of the Virgin the dancers they leave from return made the cross of the Calvary take leave of the image of Jesus and give the last gratefulness to the brotherhood, after this part became soothes of the brotherhood dancing and singing “trote”.

Lack little to go to me,
of this town so loved.
I am going away to go!
Leaving sad hearts.