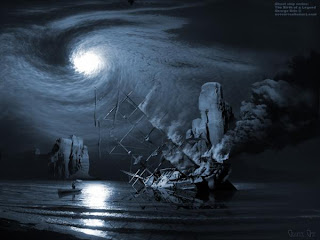 A ghost ship is a ship that is haunted, has been abandoned at sea with no evidence of its crew (or with its crew dead on board), a ship that apparently “haunts” a specific area or various combinations of the above. There are many ghost ship stories in history. Some of them seem to be easily explained, others, not so much. You see, ghost ships are not always related to claims of hauntings, there are some, like the Mary Celeste, that are simply mysterious. Here are three of the most famous ghost ships in history and descriptions of what make them ghost ships. 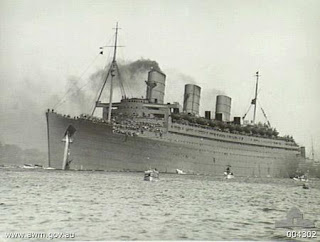 The SS Queen Mary started her life as a cruise liner. However, when World War II broke out, she was commissioned as a personnel carrier. While acting in this capacity, the Queen Mary struck the HMS Curacoa off of the coast of Ireland. It was an accident that was caused by the ship’s defensive maneuvers, which were being undertaken to avoid German U-boats. After World War II, the SS Queen Mary was turned into a hotel ship. She also reportedly became a ghost ship.
Numerous ghosts have supposedly been sighted on the SS Queen Mary. One ghost is of a woman who reportedly drowned in the ship’s pool, another is of John Pedder, a man who was crushed to death in one of the ship’s mechanical doors. The most terrifying ghostly apparition that people have claimed to bear witness to, are the ghostly screams of the crew of the HMS Curacoa. 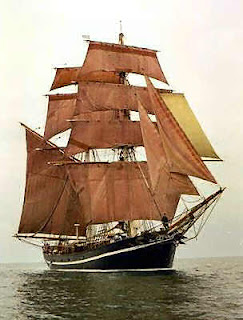 The Mary Celeste was a merchant ship that was found floating aimlessly by the crew of the Dei Gratia in 1872. None of the crew or passengers were on board. All of the ship’s cargo and all of the passenger and crew’s personal belongings were still on board. The only thing that was missing was the lifeboat. Neither the lifeboat nor the crew was ever found. No satisfactory explanation has been given for their disappearance either.
The ship was still in seaworthy condition, except for some water that had made its way in (by unknown means) and a few torn sails. This damage probably took place after the crew and passengers left, but even if it had not, the crew would hardly have been stymied by these minor problems. This mystery is what makes the Mary Celeste a ghost ship. 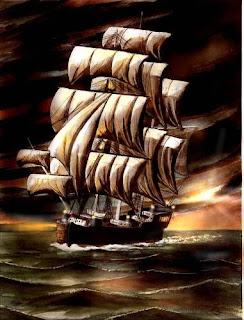 The name “Flying Dutchman” is synonymous with ghost ships. The name comes from that of a ship that was reportedly lost off of the Cape of Good Hope in 1641. It was captained by Captain van der Decken and was sailing home from Holland after spending some time trading in the east. The ship got caught in a storm which threw her up against the rocks and damaged the hull irreparably.
A probably sensationalized version of the story says that Captain van der Decken kept trying to sail the Flying Dutchman, even though she was obviously doomed. The story goes on to say that his final words before sinking into the ocean with his ship were “I will round this Cape, even if I have to keep sailing until doomsday.” (He obviously didn’t say this in English)
Since that time, there have been countless supposed sightings of the Flying Dutchman and her crew. Some of these sightings involve military personnel on board navy ships. Others involve civilians and/or civilian sailors. It is said that if you spot the Flying Dutchman, you are doomed to die shortly thereafter.
Some of these stories may very well stem from the active imagination of people out at sea. There is no denying that the ocean can be a very scary place and that when people are scared, their minds can play tricks on them. Despite the questionable nature of hauntings, ghost ships have found a permanent place in maritime history, whether they are factual accounts of mysterious ships, or hearsay accounts of maritime hauntings.