Have you ever heard 18,000 voices singing at once? This emotional experience can be felt during Estonia’s Song Festival, which occurs once every five years in Tallinn. Once in five years, tens of thousands of Estonians gather in Tallinn in the summertime to take part in the Song and Dance Festival.
The Song Festival is an enormous open-air choir concert held at the Tallinn Song Festival Grounds with the participation of hundreds of choirs and thousands of singers. The number of participants in the Song Festival can reach up to 25 or 30 thousand, but the greatest number of people is on stage during the performance of the joined choirs—there are usually 18 000 singers on stage at that moment, and their powerful song touches even the most frigid Nordic disposition.  This years celebration was held from June 30th to July 2nd 2017. 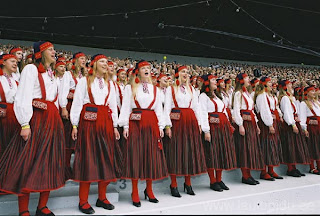 Not every choir in Estonia is able to perform at the Song Festival. Due to the popularity of the festival, there is stiff competition among the choirs, and the repertoire is rehearsed for years in advance. Only the best choirs make it to the festival.

History of the Song Festivals

In the 19th century, Estonia was a province of a Russian Empire where German upper class landlords ruled the Estonian lower class – the peasants. The 1860s marked the beginning of a period of National Awakening. The Song Festival tradition began with the first Song Festival organised by Johann Voldemar Jannsen and the “Vanemuise” society in Tartu in June 1869. 51 male choirs and 5 brass bands encompassing 845 singers and musicians gathered in Tartu. 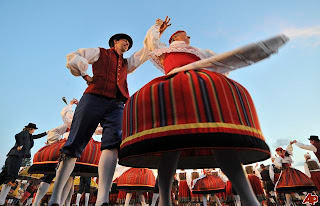 The Song Festivals have taken place regardless of the political situation. The foreign authorities have tried to use the Song Festivals in their own interests. The Soviet regime always tied the Song Festivals to the “red holidays”. Foreign and propagandist songs had to be sung in order to preserve the chance to sing Estonian songs. A good example of an Estonian song was “Mu isamaa on minu arm”, which during the occupation years became an unofficial anthem for the Estonians, and which, performed by the joined choirs to the standing audience, ended every Song Festival.

The term “the singing nation” expresses well the Estonian identity that has united the nation in its struggle for national independence before 1918 and during the period of the Soviet Occupation (1941-1991). In 1988 began the so-called “Singing Revolution”, based on the Song Festival tradition, when hundreds of thousands of people gathered in the Song Festival Grounds to make political demands and sing patriotic songs. There is a belief that Estonians sang themselves free from the Russian occupation. More than 300 000 people participated in a huge event entitled “The Song of Estonia” in       September 1988, and for the first time the re-establishment of Estonia’s independence was openly demanded. 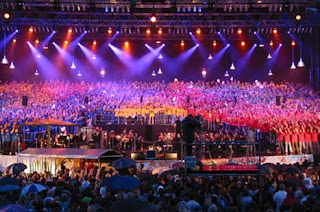 The first Estonian Games, Dance and Gymnastics festival, held in 1934, was the precursor of the present Dance Festival. 1,500 folk dancers performed there.
The Dance Festival is a complete performance with a certain theme. The dancers in their bright national costumes form several colourful patterns on the dance field. The Dance Festival is usually held on the same weekend as the Song Festival. These two festivals commence with a united festive parade through the city from the centre of Tallinn to the Song Festival Grounds.

The greatest Dance Festival of all times (the 9th) took place in 1970 with over 10 000 performers. By then a structure based on age groups had developed with performers including toddlers and seniors, the dancing veterans. The youngest dancer at this festival was 4 years old and the oldest 76! All the following festivals have had the optimal 8 000 performers.
In November 2003, UNESCO declared Estonia’s Song and Dance Festival tradition a masterpiece of the Oral and Intangible Heritage of Humanity.

The 25th Song and Dance Festival took place from 2 – 5 July 2009 in Tallinn. The Song Festival celebrated its 140th anniversary, the Dance Festival its 75th. The total number of performers was 34 000 and they performed before an audience of 200 000!

The wide world begins in a small land

We all experience the world through our own eyes. The big becomes big only when seen side by side with the small.
A small child’s perception of the world may be much wider than that of a grown-up. And a small nation can be big in the eyes of the world if it is great in spirit and mind.
The desire to see the big world takes us away from home until we understand that home is where the world begins. And when we realise that, we will return.
We will return because it is only here where the stories about our land and our people are born. The stories that will always be remembered, treasured and continued.

XI Youth Song Celebration is almost a 6-hour long concert with different choirs and orchestras performing. The songs and music take the most powerful form when joint choirs start performing.
XI Youth Dance Celebration  is almost a 2-hour dance performance with thousands of dancers’ and gymnasts’ groups on the dance ground. Together they form beautiful dance patterns and all in all perform more than 20 different dances and gymnastics’ programs.
The first dance performance starts with the joint opening ceremony of the XI Youth Song and Dance Festival. The joint choirs will stand on the song stage and the dancers will perform on the area in front of the stage. The lighting of the song and dance celebration fire forms an important part of the opening ceremony. 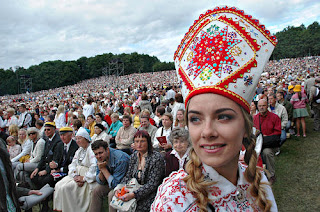 It is best to follow the dance performance from above as then the beautiful dance patterns will be better to follow. At the same time – sitting close to the performance, the viewers can see the beautiful national costumes that the dancers are wearing, and also the details of the dances.

About the tradition of Song and Dance Celebration in Estonia