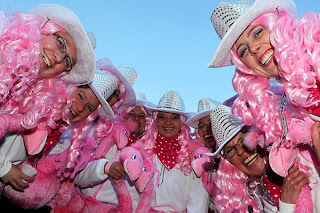 Carnival in Cologne is almost as old as the history of the city itself.  But the organized carnival celebrated today only dates back 178 years.
The Greeks and Romans celebrated cheerful spring festivals in honor of Dionysos and Saturn with wine, women and song.  The ancient Germans celebrated the winter solstice as a homage to the Gods and expulsion of the evil winter demons.  Later the Christians adopted the heathen customs.  The period of fasting (Lent) prior to Easter was heralded in by “Fastnacht” or “Karnival”…carne vale = Farewell to meat! 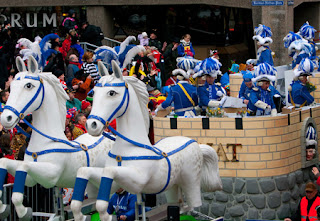 In the Middle Ages, the celebration of Carnival, the masquerade, often took on drastic forms, very much to the displeasure of the city council and the church.  Bans and ordinances did little to help, the celebration was wild and spirited.
The boisterous street carnival was extended in the 18th century to include the so called “Redouten”, elegant masked and fancy dress balls in Venetian style, which were initially the preserve of the aristocracy and the wealthy patricians.  In 1736, the first Redoute was held in Cologne in a noble house on the Neumarkt. 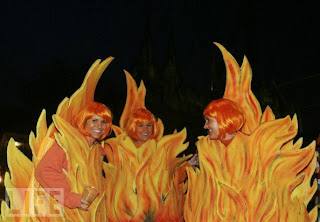 Almost 50 years later, Cologne was captured by the French revolutionary troops.  But the new rulers allowed the locals “de fair son tour”, to hold their carnival parades.  The Prussians, who took control a short time later, were stricter, which, however, did not prevent the natives of Cologne from cultivating their Carnival tradition.  Carnival was romanticized and became bourgeois.  It became organized!  With the “Carnival Hero”, with today’s Prince Carnival, a new idea was also introduced.
In 1823 the “Festordnende Komitee” was founded.  On February 10th of that year, Cologne celebrated the first Rose Monday Parade with the moto “Inthronization of the Carnival Hero”.  Also involved were the “Rote Funken” the former city militia, who had just established themselves as a carnival society, the carnival fool of the “Hillige Knaachte un Magde”, Jan von Werth and Cologne’s “Peasant” and “Virgin” as a reminder of the former free imperial city of Cologne.  At that time, like today, a man wore the costume of the Virgin.   In 1860, the first “Ghost Parade” was held on the evening of Carnival Saturday.  Even after the turn of the century, the “founding period” of the Carnival fans continued.  In 1902, the “Ehrengarde” was formed as the accompanying group of the Peasant and Virgin.  In 1906, Prince Carnival was given his “Prinzengarde”.  Other societies established themselves.  Willi Ostermann,  with his songs and musings, Grete Fluss extended the fame of Cologne’s Carnival beyond the city’s boundaries. 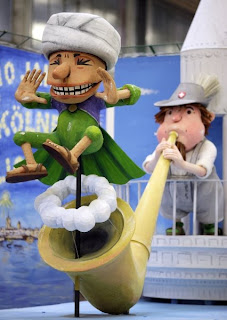 The “Sitzungen” (shows) with their humorous orators and singers bridged the gap between the opening of the “Carnival Session” On “11.11” to its climax on Rose Monday.  That is still the same today.  Now it is bands like the “Black Fooss”, “Hohner” and “Paveir” and humorists like “Rumpelstizchen” or “Webfachmann” who are the trade marks of Cologne’s “Fifth Season”.  The  world famous “Strippefottchen–Tant” of the Rote Funken, a parody on the soldiers’ strict life.
There are approximately 160 carnival societies, local history societies and district groups in Cologne which celebrate their home town festival in about 5oo parties, balls and parades. The highlight is always the Rose Monday Parade.