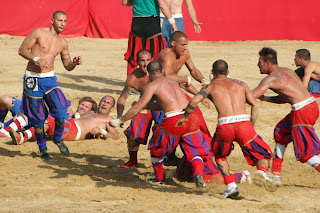 COSTUMED WITH A MEDIEVAL AIR

A sport for all times, the Calcio Storico or traditional football played in costume, in Florence, Italy, dates back to the 15th century. Woven with Italian brain, brawn and passion, the Calcio Storico was played by the aristocratic young noble men in front of the Basilica of Santa Croce and some times in the areas of Via Il Prato, Piazza della Signoria or Piazza Santa Maria Novella in celebration of the Feast of St. John. Held every year on June 24th, the awesome pageant of the Calcio Storico takes you to its ancient origins where ‘calcio in costume’ or ‘costume football’ was played for over 500 years.

With traditional districts to identify each of the four teams, the Calcio Storico, ‘calcio livrea’ or ‘football in livery’, colors the spirited pageant with the teams dressed in different colors, blue for St. Croce, red for St. Maria Novella, white for St. Spirito and green for St. Giovanni. Stimulating and involving body, mind and soul, the bloody and violent sport of the Calcio Storico stunned even the armies of Charles V, who had come to re-install the Medici government with the sound of firearms and the cannon tearing through the air. The Florentines continued their game as if nothing had happened as His Royal Majesty and his Imperial army stared in utter shock at the Renaissance costumed players as they proudly upheld their traditional game. 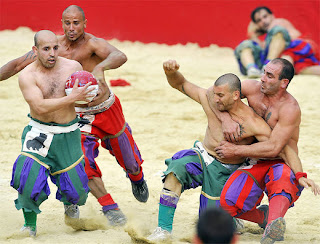 Written by Count Giovanni de’Bardi di Vernio in 1580 in his ‘Treatise on Football’, the Calcio Storico has 54 players divided into two teams which are lined up in three rows.
Though there are no major rules in this game, the final result has to end in a ‘caccia’ or goal. Each end of the opposite walls has a four-foot wooden wall that runs its entire length. The round red and white ball is tossed over the wooden wall which denotes a ‘caccia’ or a goal. In the center of each goal wall a narrow white tent with red trimmings and a red flag guards its goal while the captain of the team with the flag 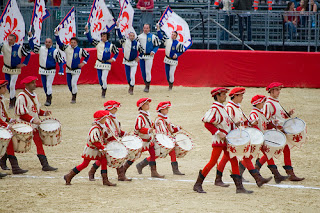 With sand layering the entire square, the players run with the ball in their hands and pass it to their team mates. As they run, the opponent team tries to stop the player and pin them down till they are rescued by their own team players. This often results in their costumes being torn to bits and the players bloodied up but not too severely. There are six referees positioned at various points dressed in colorful Renaissance outfit of smooth velvet caps with ostrich feathers and a doublet of rich shades with knickerbockers. The referee judge with a sword has a plumed hat that he sweeps with a flourish to acknowledge change of sides. The goal scored by the winning team spurs the standard bearer to run around the square waving the team’s flag, whilst the losing 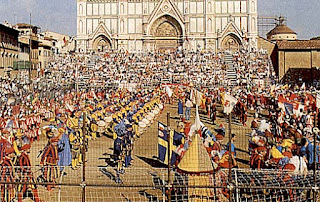 team’s standard bearer looks down-faced. Before each game is played, a long and solemn procession starts from Piazza Santa Maria Novella at 4 p.m., and winds through Via de’Banchi into Via Rondinelli to Via Tornabuoni going through Via Strozzi, around Piazza della Republica and into Via degli Speziali and up the winding Via Calzaiuoli to the picturesque Piazza della Signora right to Via della Ninna and finally through Via de’Neri till it reaches Borgo Santa Croce with much fanfare and trumpets.
Horsemen follow with foot soldiers in armor or the ‘alabardieri’, completely suited with the ancient Florentine helmets of iron and corsalets of leather. Twenty drummers perform in sync, wearing dashing yellow and blue silk tunics with the famous crimson 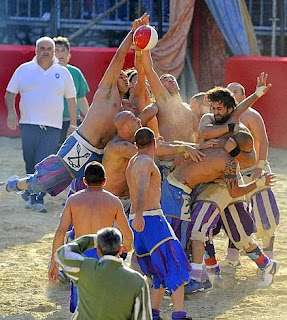 lily of Florence emblazoned on their drums as a symbol of freedom and peace. The Ball Bearer carries the ball with the colors of the chosen teams followed by twenty six infantry men in colorful uniforms with feathers in their caps. A young heifer bedecked with garlands being the traditional prize of the winners is led by two oxen drivers who are dressed in white smocks with leather vests with enthusiastic shouts of ‘Viva Fiorenza!’ echoing around. A presenter announces the members of the aristocratic 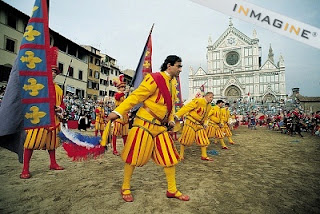 families who are followed by the gonalfiers, the keepers of the four ancient city quarters of Santa Croce, Santo Spirito, Santa Maria Novella and San Giovanni. Then the representatives of the old corporations, the musicians, the flag bearers, the mace carriers, the referees and the players in their beautiful Renaissance attire walk with the parade. This fantastic pageant was a traditional festival it was stopped for a period in 1739 by the Grand Dukes of Lorraine, but was re-started in 1930 by the Fascist Government. The historical game of the Calcio Storico follows its traditional rules with the Santa Croce area having the Blues or the Azzuri, San Giovanni with the Greens or the Verdi, Santa Maria Novella with the Reds or the Rossi and Santo Spirito with the whites or the Bianchi. The game does not allow anyone with a criminal record to participate in it. Over 500 dignitaries that include military officers, politicians, bankers, 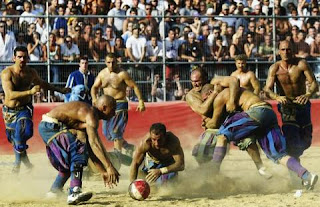 judges, nobility and rich merchants walk behind the parade in their bright and rich Renaissance costumes. The flag bearers in their costumes of short tunics and soft leather boots with tights carry sixteen flags with different symbols. The sound of the cannon heralds the bandierai who perform awesome acrobatics with their sticks as the parade retires to their respective seats.  Following the semi-finals, the final match takes place on 24 June and winners are rewarded with a mass of steaks equivalent in weight to the more traditional prize of a white calf or bistecca fiorentina, which was historically butchered for the occasion, and then there are fireworks after all of the other festivities have ended.