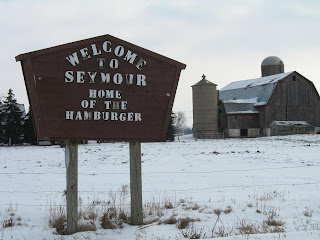 Hamburger Charlie and the Early Days of the Hamburger

Who was “Hamburger Charlie”?

Charlie Nagreen was born in Hortonville, Wisconsin in 1870, where he spent his boyhood. He began his ground beef and onion career at age 15 when he loaded up his ox can and traveled 20 miles north to Seymour to sell meatballs at the fair.

Why was Charlie selling meatballs?

The meatball was easy to assemble and the young lad knew people would be hungry after walking around viewing the agricultural exhibits at the fair. What he didn’t realize was that people wanted to keep moving and visit the displays.

How did the hamburger come about?

Charlie was a resourceful young man with an outgoing personality. After not experiencing much success selling the meatballs, he had an idea and located some bread. He realized people could take this meal with them if he simply smashed the meat together between two pieces of bread. He called it a “hamburger” and yes, in 1885 the burger was born at the fair in Seymour, Wisconsin.

How did he come up with the name “hamburger”?

Many German immigrants lived in the Hortonville area. Ground up beefsteak was a popular choice for the dinner table. This steak was named after the German city of Hamburg where it was commonly consumed. Since the name was easily recognizable; “Charlie” used it to get attention. He then spread onions on top and the word spread to taste the gastronomical delight that Charlie had to offer.

Did Charlie visit other fairs?

Charlie returned to the Seymour fair for the next 65 years, but numerous other fairs were added to his summer circuit. Evidence indicates he brought his meat treat to fairs in Shawano, Green Bay, Weyauwega. Oshkosh, New London and others. “Charlie’s” stand was a popular spot and people in neighboring communities came to believe they couldn’t have a fair without “Charlie”. 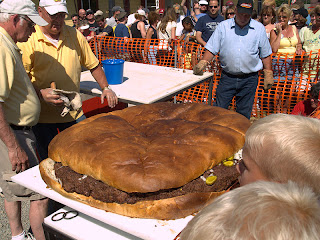 How do we know that Seymour is truly “the home of the hamburger”?

Numerous communities from New Your to Texas claim to be the birthplace of the burger, but no one can supply any evidence dating back to 1885 like Seymour. Early newspaper articles, interviews with contemporaries and Charlie’s daughter all verify the burger was served at the Seymour fair in 1885.