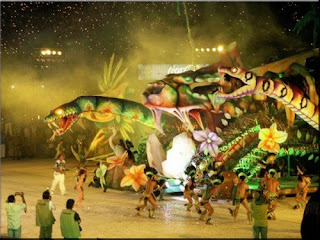 The Boi Bumbá Festival presents myths, tales and legends using characters, parade carts and giant puppets followed by the words of a master of ceremonies who describes in detail every bit of the action.
It is an incredible musical and theatrical experience, a religious procession, a tribal ritual, a giant puppet show, a fairy tale of powerful villains and brave heroes, a folk art presentation, a major party for the audience and an energizing choreography of the galera (gah-le-rah), all at once. The characters in the performance come from the Boi Bumbá tale. There are two teams called Bois (plural of Boi). Each one tells the same story in all three night of the festival, amounting to 6 different performances of the same show. But every night is different because legends, rituals, dances, puppets, garments, alegorias, they all change and create the show anew. 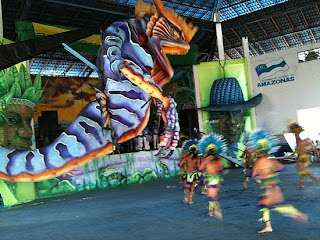 There are many similar festivities in Brazil, but Parintins is the home of the biggest and most impressive of all. It is both an artistic display and a dispute between two different teams: Bois Caprichoso (cah-pree-show-zol) and Garantido (gah-run-tee-dow). Boi is the Portuguese word for ox, and it is also the main character of the drama that unfolds every night in an arena closely watched by 35,000 people. After the 3-hour show of each Boi, the city has food, drinks and party for everybody. The main square, countless bars and every little corner near the Bumbódromo accommodate a crowd still full of energy to mimic the dance and songs of their favorite Boi. 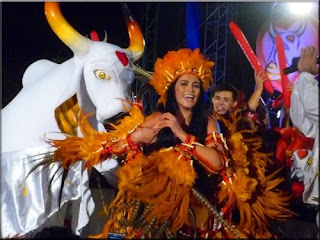 Parintins folklore has its own principles: it expresses spontaneous culture and evolves freely, always in its own terms. It is not clear exactly how the whole thing started. Some accounts hold that Lindolfo Monteverde, the alleged creator of Garantido, brought to life a bedtime story he used to hear from his grandfather. Similarly, Caprichoso is considered to be a creation of José Furtado Belém and the Cid brothers. Each Boi would be the result of a different promessa to St. John the Baptist.
The play tells the story of Pai Francisco, who worked in a farm, and Mãe Catirina, his pregnant wife who longed to eat beef tongue. Pai Francisco kills an ox to satisfy his wife’s craving. Unfortunately, this ox is the farm owner’s favorite. A priest and a doctor fail to revive the Boi, for whose death Pai Francisco would be sent to jail. The story has a happy end thanks to the ritual performed by a pajé (pa-zhe, shaman) . Pai Francisco is forgiven and the whole ordeal ends in a major party that celebrates the Boi’s life. 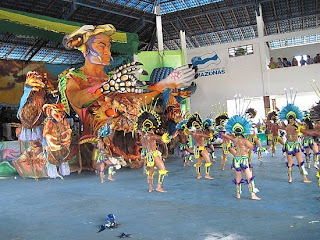 Celebrations in Parintins Parintins began modestly enough with processions throughout the city. As time went by, the festival, the story and the characters changed to incorporate legends, rituals, music and dance of local indians and to celebrate the lifestyle of the caboclo, the countryman who has a mixed heritage of Europeans an aborigines.

History of The Festival

Some people say that Bumbá Garantido was founded by Lindolfo Monteverde.
As a young boy, Monteverde enjoyed hearing the stories his grandfather used to tell. His favorite story was the tale of a happy and cheerful ox who danced and was deeply loved by everyone. One day, Pai Francisco , who worked for the farm owner, kills the ox to fulfill the desire of Mãe Catirina , his pregnant wife, to eat beef tongue. The 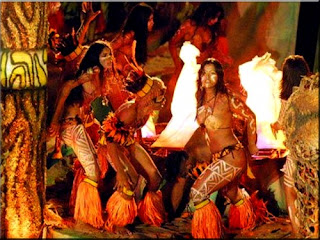 couple is then chased by all villagers while a doctor, a priest, the owner and his daughter Sinhazinha try to save the ox’s life. After much praying the ox is resuscitated, to the great joy of all. A huge party then takes place and Pai Francisco , the story’s villain, is forgiven.
Years later the story remained in Monteverde’s imagination, so one day he built a wooden frame, covered in fabric and paraded around Parintins with his Boi Bumbá .
After Monteverde joined the army, he became very sick and made a promessa (prayer) to St. John the Baptist. He promised that if he ever regained his health, his Boi would always come to the streets, as long as he lived. His prayer was answered, and that was the beginning of Boi Garantido. 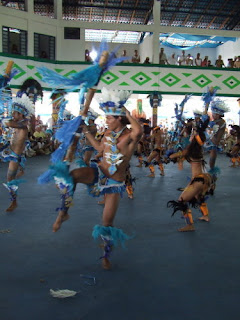 According to the legend, Monteverde was a fine improvisation artist and created impromptu verses for the toadas as teasers for the opposite Boi . His deep voice could be heard from far away.
Boi Garantido is white and his symbol is a red heart. There are several versions for the origin of the Garantido name. According to one of them, once during the show one of the horns of “Boi contrário” ( Caprichoso ) fell down. Monteverde immediately seized the opportunity and sang “our Boi always comes out in one piece. That is for sure! (‘ garantido ‘)”. In another version of the story, a Caprichoso singer said “take care this year, for my Boi is finely built (“ caprichado ”). To which Monteverde responded “well, then finely build yours, for mine is sure thing (‘garantido’)!” There are many other versions and people in Parintins are always eager to tell them. 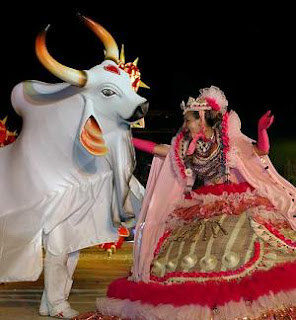 Bumbá Caprichoso was allegedly created by the Cid brothers in 1913 in what is now the “blue portion” of the city. They moved to Parintins in search of work. They wanted to start a family and a new life. They too made promessas to St. John the Baptist, and their prayers were answered. In return they built an ox puppet in honor of the Saint.
José Furtado Belém, a lawyer and politician from Parintins, saw a Boi dance when he went to Manaus . He liked the idea and created Boi Galante with the Cid brothers. The first version was a crude cardboard box that came to the streets in june 1922. In 1925, a group of people that included the Cid brothers wanted to create a Boi Bumbá . Colonel João Meireles named it Caprichoso , a Boi from Manaus of which he was a big fan. Caprichoso began as a group of 20 with a blue star as a symbol. 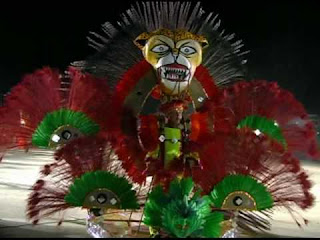 The festival also is a competition. The winner is chosen by a jury that evaluates each Boi according to several criteria, such as the presentation of the Boi, the indian tribe and their chiefs tuxauas (to-shall-us), the shaman rituals, songs, alegorias, choreographies, etc. One of the most fascinating aspects of the festival is the enthusiastic participation of the audience in the Bumbódromo. The support of the galeras (the crowd of fans cheering for each Boi) is also evaluated by the judges, and each Boi has people who are in charge of organizing the galera. The Bumbódromo is divided in two halves for the Garantido and Caprichoso fans, who dance and wave handkerchiefs and candles. They rock and roll when each new character comes into the scene.
People are very serious about taking sides in Parintins. Everybody in town has roots that go all the way up to one of the teams, and there is no compromise between them. You can never ever support the wrong Boi – for if you do so, the opposite Boi could win. Even with such strong feelings, hooligans have no place here. Whenever one side is performing, the other maintains complete silence.
In the morning of the fourth day, the winner is announced, after which the fans and supporters of the winning Boi parade around town. Both sides are swept in emotion, but the police is on the watch and prevents any disorderly behavior. 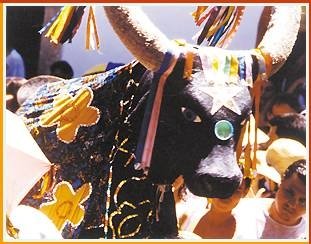 Folklore, Myths and Legends of The Festival

The Boi Bumbá festival presents myths, tales and legends using characters, parade carts and giant puppets followed by the words of a master of ceremonies who describes in detail every bit of the action.
The characters in the performance come from the Boi Bumba; tale. The main character is the Boi , played by a man named tripa (“guts”) who dances holding a frame covered in fabric. There are two Bois : Garantido is white with a red heart on its forehead, while Caprichoso is black and has a blue star. In Parintins, the vaqueiros of the tale are replaced by Pai Francisco, Mãe Catirina, Amo do Boi and Sinhazinha. Together, they lead the boi, who is wounded, killed and then revived.
The presence of Indian s Maué, Sapupé and Parintins, who lived in the island long before the tale was created, is also incorporated to the plot. There is the Pajé, who resuscitates the Boi; Cunhã-Poranga, the icon of female beauty who conquers the hearts of the tribe warriors; and the Tuxauas, the symbol of divinity and Indian wisdom.
Parintins Bumbódromo is the stage where characters from Indian myths – Iara, Curupira, Gigante Juma, Cobra Grande, Formiga do Fogo, boto cor-de-rosa – come to life.
The music in the festival is strongly influenced by Indian traditions, as evidenced by the use of the palminhas, maracás de lata and drums. The tribe tuxauas parade to the beat of an Indian dance. 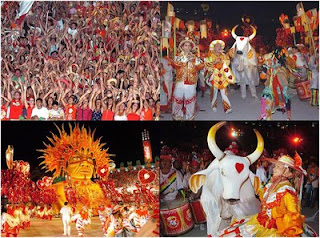 In Parintins, Bumba-meu-boi is also a token of gratitude towards St. John . The festival is in June precisely because it is also the month traditionally associated with that saint. It is a part of the festas juninas (June celebrations) cycle, which includes celebrations in honor of St. Anthony and St. Peter. [For more information see Folclore brasileiro by Nilza B. Megale, Editora Vozes; A ciência do folclore by Rossini Tavares de Lima, Editora Martins Fontes; Dicionário do folclore brasileiro by Luís da Câmara Cascudo, E ditora Global.
Not unlike most popular celebrations in Northeastern Brazil , Parintins festival has a large public participation. There are some three thousand brincantes in the celebration.
Shamanism involves mystical ceremonies in which the shaman – a wich doctor with supernatural healing powers, ability to communicate with spirits and tell the future – comes into a trance and supposedly leaves his own body. The presence of shamans is mandatory in the performance (much like of the baianas section in Brazilin Carnival), which takes a lot of research from the organizers, once it must be historically correct. The Pajé and the Tuxuauas bring about the happy end by reviving the Boi . The pajelança , a mystical healing ceremony, invokes the soul of the beast, which is different every year (the cobra grande , for instance) which is invoked in order to bring the Boi back to life. 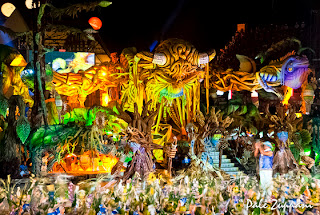 It is only natural that the Parintins folk festival changed with time due to the contact with Indian culture. Before the eighteenth century, intellectuals regarded popular manifestations as a byproduct of ignorance in arts and sciences. In the nineteenth century, experts accepted the liveliness and spontaneity of those manifestations, in contrast with academic formalism. A careful analysis can detect all kinds of influences in popular manifestations, such as ancient religious beliefs, basic wishes and fears of human beings, political longings of the population and even historical facts