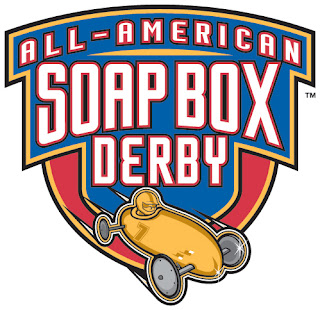 The Soap Box Derby is a youth soapbox car racing program which has been run in the United States since 1934. World Championship finals are held each July at Derby Downs in Akron, Ohio. Cars competing in this and related events are unpowered, relying completely upon gravity to move.  This years event was held from July 16th to the 22nd for 2017.

In the wake of the first car races, local kid auto races took place in the US at a very early stage. In 1914 the motion picture Kid Auto Races at Venice starring Charlie Chaplin was shown in the cinemas.  The first All-American race was held in Dayton on August 19, 1934, after an idea by Myron Scott, a photographer for the Dayton Daily News. The following year, the race was moved to Akron because of its central location
and hilly terrain. In 1936, Akron civic leaders recognized the need for a permanent track site for the youth racing classic and, through the efforts of the Works Progress Administration (WPA), Derby Downs became a reality.
An accident in 1935 captured the public’s interest, and boosted the event’s profile. A car went off the track and struck NBC‘s top commentator and sportscaster Graham McNamee while he was broadcasting live on the air. Despite a concussion and other injuries (which would necessitate a two-week hospital stay), McNamee described the collision to his listeners and finished his broadcast. 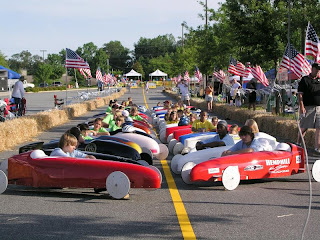 Using standardized wheels with precision ball bearings, modern gravity-powered racers start at a ramp on top of a hill, attaining speeds of up to 35 miles per hour. Rally races and qualifying races in cities around the world use advanced timing systems that measure the time difference between the competing cars to the thousandth of a second to determine the winner of a heat. Each heat of a race lasts less than 30 seconds. Most races are double elimination races where a racer that loses a heat can work their way through the Challenger’s Bracket in an attempt to win the overall race. The annual World Championship race in Akron, however, is a single elimination race which uses overhead photography, triggered by a timing system, to determine the winner of each heat. Approximately 500 racers compete in 2 or 3 car heats to determine a World Champion in each of six divisions. 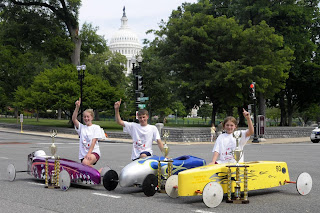 During its heyday in the 1950s and 1960s, when Chevrolet was a sponsor and famous TV and movie stars made guest appearances, as many as 70,000 people would gather in August to eat snow cones and cheer hundreds of youthful racer/builders (boys only in early years) ages 11–15 who were the champions of local races around the nation and from several foreign countries. In 1947, actor James Stewart was appearing in the Broadway play Harvey; in order to attend the event, he cancelled a weekend’s worth of performances and refunds were issued to ticketholders. At its peak, the Derby was one of the top 5 sporting events in terms of attendance. 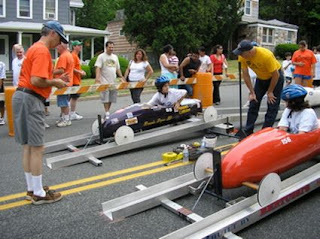 Today there are broader categories that extend the age range to younger racers and permit adults to assist in construction. This is especially helpful for younger children who cannot use power tools, as well as to provide an outlet for adults.
Starting in 1993, the All-American Soap Box derby began the Rally World Championship. The Rally derby, works on a grand prix style of race where each district, 10 in all, send back a number of champions based on number of racers and races in each district.

The Ultimate Speed Challenge is an All American Soap Box Derby sanctioned racing format that was developed in 2004 to preserve the tradition of innovation, creativity, and craftsmanship in the design of a gravity powered racing vehicle while generating intrigue, excitement, and engaging the audience at the annual All-American Soap Box Derby competition. The goal of the event is to attract creative entries designed to reach speeds never before attainable on the historic Akron hill. The competition will consist of three timed runs (one run in each lane), down Akron’s 989’ hill. The car and team that achieve the fastest single run will be declared the winner. The timed runs are completed during the All American Soap Box Derby race week. In 2004, during the inaugural run of the Ultimate Speed Challenge, the fastest time was achieved by a car designed and built by the Pearson family, driven by Alicia Kimball, and utilizing high performance pneumatic tires. The time achieved on the 989′ track was 27.190 seconds. Jerry Pearson returned to defend the title with driver Nicki Henry in the 2005 Ultimate Speed Challenge beating the 2004 record time and breaking the 27.00 second barrier with a 26.953 seconds elapsed time. John Wargo, from 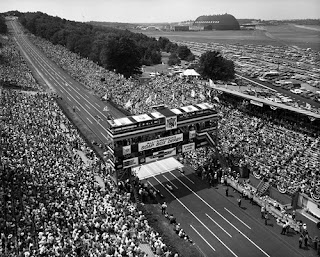 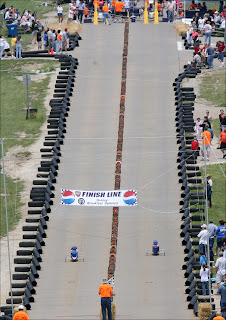 In 1973, 14 year old Jimmy Gronen of Boulder, CO was stripped of his title two days after winning the national race. Suspicions were running high even before the finals, and Gronen was actually booed by many spectators.
The unusual dimensions of Gronen’s margins of victory and heat times tipped off derby officials to illegal circumstances surrounding Gronen’s racer. Subsequent X-ray examination of his car revealed an electromagnet in the nose. When activated at the starting line, the electromagnet would pull the car forward by attracting it to the steel paddle used to start the race. Gronen would activate the electromagnet by leaning his helmet against the backrest of his seat, which activated its power source. This became 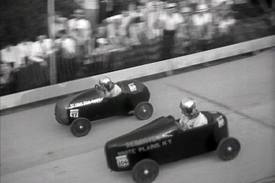 very evident as Gronen’s heat times progressively slowed down as the race wore on, because the electromagnet lost strength each time it was activated. Usually, heat times get faster each time a racer completes a heat. Videotape of the race also showed a suspiciously sudden lead for Gronen just a few feet after each heat began. The margin of victory for a race heat will normally be no more than 1 to 3 feet. Gronen’s early heat victories were in the 20 to 30 feet range. (Aluminum insulator plates were added to the starting ramps in 1974 to render an electromagnetic system useless.)
Midway through the 1973 race, Derby officials also replaced Gronen’s wheels after chemicals were found to be applied to the wheels’ rubber. The chemicals caused the tire rubber to swell, which reduced the rolling resistance of the tire. 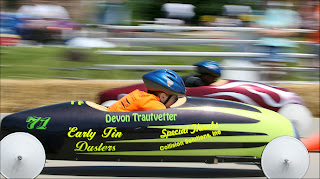 In the final heat, Gronen finished narrowly ahead of Bret Yarborough. Within two days, Yarborough was declared the 1973 champion.
Gronen’s uncle and legal guardian at the time, wealthy engineer Robert Lange, was indicted for contributing to the delinquency of a minor and paid a $2,000 settlement. Lange’s son, Bob Lange Jr. (and Jimmy Gronen’s cousin) had won the previous 1972 Derby using a car considered to be indistinguishable from the vehicle used by Gronen. Boulder, Colorado was also banned from any future participation in the All-American Soap Box Derby.