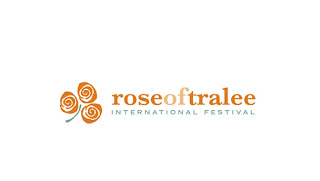 The Rose of Tralee festival is an international competition which is celebrated among Irish communities all over the world. The festival takes its inspiration from a nineteenth century ballad of the same name about a woman called Mary, who because of her beauty was called The Rose of Tralee. The words of the song are credited to C. (or E.) Mordaunt Spencer and the music to Charles William Glover, but a story circulated in connection with the festival claims that the song was written by William Pembroke Mulchinock, a wealthy Protestant, out of love for Mary O’Connor, a poor Catholic maid in service to his parents.

The festival has its origins in the local Carnival Queen, once an annual town event, fallen by the wayside due to post-war emigration. In 1957, the Race Week Carnival was resurrected in Tralee, and it featured a Carnival Queen. The idea for the Rose of Tralee festival came when a group of local business people met in Harty’s bar in Tralee to come up with ideas to bring more tourists to the town during the horse racing meeting and to encourage ex-pats back to their native Tralee. Led by Dan Nolan, then managing director of The Kerryman newspaper, they hit on the idea of the Rose of Tralee festival. The competition started in 1959 on a budget of just £750. 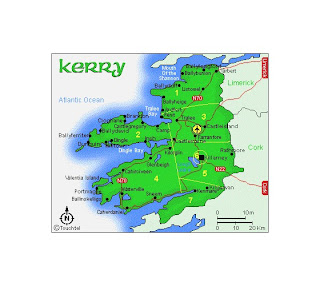 The founders of the organisation were: Billy Clifford – an accountant with the Rank Organisation who was one of the first recipients of the Golden Rose award (which was inaugurated to celebrate the 10th Anniversary of the Festival of Kerry); Dan Nolan, the owner of The Kerryman newspaper and involved with Tralee Races; Jo Hussey, a shopkeeper in Tralee and Ted Healy.
Originally, only women from Tralee were eligible to compete, in the early 1960s it was extended to include any women from Kerry, and in 1967 it was further extended to include any women of Irish birth or ancestry.

The Story of the Rose of Tralee

Mary O’Connor lived in the middle of Tralee town, in Brogue Lane, which took its name from the broguemakers (or shoemakers) who lived and worked there. Mary lived in a thatched cabin with her parents, sisters Brigid and Ellen and younger brother Willie. Her father was a broguemaker, and her mother worked as a dairymaid. Mary was very beautiful; she had long dark hair and soft, shining eyes.
Her status as the daughter of a broguemaker and dairymaid meant Mary was destined for work as a maid or house-help. When she was 17 she secured employment as a kitchen maid for the Mulchinock household in Tralee. 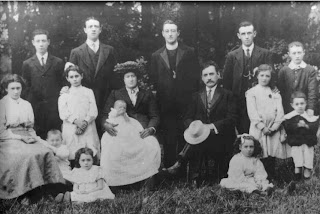 The Mulchinocks were a wealthy family of merchants who owned a wool and linen draper’s shop on the site of what is now Heaton’s department store in Tralee.
Michael Mulchinock had married Margaret McCann and they lived in the grand Mulchinock house, West Villa. The family owned a considerable amount of land around the house and the neighbourhood, as well as property in town. They had servants, coachmen, gardeners and farmhands.
Michael died of a fever in 1828, so Margaret Mulchinock was head of the household when Mary O’Connor started working in the kitchens of West Villa. Also living in the house were Margaret’s sons William Pembroke, Edward, Henry and her married daughter Maria.
Mary O’Connor was delighted to be given employment at West Villa, and soon Margaret’s daughter, Maria, seeing that Mary was intelligent and kind to her children asked her to be maid to her daughters Anne and Margaret. 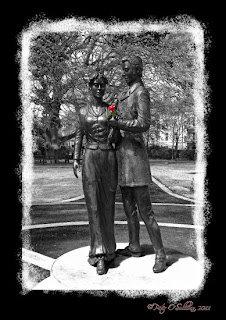 Margaret Mulchinock’s sons had grown to be young men and William was becoming a dreamer. In the eyes of his family he was good-for-nothing, and even worse: a poet.
In November 1840 Henry, William’s younger brother, died. William was inconsolable as he was closer to William than his more practical brother Edward. He wrote a poem about his feelings:

For him of the fair young brow I weep,
Who takes in the churchyard now his sleep;
For he was the star above sun-bright,
That tinged with the light of love my night.

It wasn’t long before William met his sister’s new nursemaid. As soon as he saw Mary he was transfixed by her eyes, her grace, her long dark hair and delicate skin.
Mary and William began to meet each other every day by the well in the grounds of West Villa, that looked out over the sea and mountains. Sometimes they walked down Lover’s Lane or up to Clahane to dance.
One night beneath the pale, silvery moon William asked Mary to marry him. However, William’s family disapproved of him seeing Mary, the broguemaker’s daughter who lived in a small peasant house in the middle of town. Whilst Mary loved William, she knew that their union could never be, as it would force him to turn his back on his family and he would begin to regret the day he’d ever met her. She declined his offer of marriage.
William refused to give up. He wrote a song for Mary to try and convince her otherwise.
The pale moon was rising above the green mountains,
The sun was declining beneath the blue sea,
When I strayed with my love by the pure crystal fountain,
That stands in the beautiful Vale of Tralee.

She was lovely and fair as the rose of the summer,
Yet ’twas not her beauty alone that won me.
Oh no, ’twas the truth in her eyes ever dawning
That made me love Mary, the Rose of Tralee.

But Mary still refused to marry him.
The next evening, after attending a political rally in town, William went to visit Mary at West Villa and gave her a ring which he placed on her finger. Suddenly the door burst open and a friend of William’s rushed in to inform him that William had been accused of the murder of a man at the rally. Two men had got into a fight and as leader of one of the rebel groups challenging the upcoming election, William had been held responsible. William’s friend informed him there was a warrant out for his arrest and a reward of 100 gold sovereigns for finding him. He was told to make for Barrow Harbour and get on a wine ship that was leaving that night. William kissed Mary goodbye and told her he would return soon. 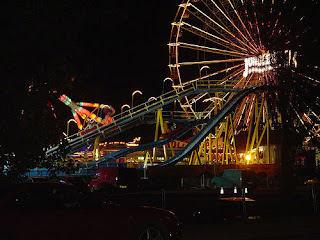 William made his way to India where he worked as a war correspondent. Here he met an officer from Limerick who asked William what had bought him to India. When William told him the officer said he would use his influence to get William returned to Ireland, and to Tralee, a free man.
So in 1849, some six years after leaving Tralee, William returned. He stopped off at The Kings Arms in Rock Street for a drink before planning to visit Mary in nearby Brogue Lane. The landlord began to draw the curtains to mark the passing of a funeral coming down the street. On enquiring who the funeral was for, William was told it was for a local girl from Brogue Lane, a lovely and fair young woman named Mary O’Connor – the Rose of Tralee.
William was devastated and his heart broken. There was nothing left for him but to visit Mary’s grave on the outskirts of town. The famine was at its height in Ireland at this time and most of the country’s eight million inhabitants were trying to survive on a diet of potatoes alone.

William never got over Mary’s death, and despite marrying and having children with an old flame he refused to forget her.
William moved with his family to New York in 1849 but returned alone six years later to Tralee and lived the rest of his life in Ashe Street. He died in 1864 at the age of 44 and at his request was buried at the graveyard in Clogherbrien next to his true love Mary, the Rose of Tralee.
You can visit Mary O’Connor’s grave at the graveyard in Clogherbrien by taking the Fenit road out of Tralee and the graveyard is on the right hand side.

The Rose of Tralee festival is now held annually at the end of August in Tralee, County Kerry, to choose a young woman to be crowned the Rose. The winning Rose is the woman deemed to best match the attributes relayed in the song: “lovely and fair”. The winner is selected based on her personality and should be a good role model for the festival and for Ireland during her travels around the world. In contrast to beauty 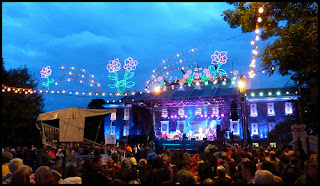 pageants, there is no swimwear section in the Rose of Tralee contest and the contestants are not judged on their appearances but rather their over-all personality and suitability to serve as ambassadors for the festival. The festival bills itself as celebration of the “aspirations, ambitions, intellect, social responsibility and Irish heritage” of modern young women.
Each of the 32 counties in Ireland select a Rose and there is also a Rós Fódhla representing the Gaeltacht or Irish-speaking areas in Ireland. Regional finals are held in June where six Irish women are selected to take part in the International Rose of Tralee festival. Roses from Kerry, Dublin and Cork automatically qualify for the festival held in August.

There are international Roses chosen from around the world who also participate in the Rose of Tralee festival. These include the centres of Birmingham, Boston, Darwin, Dubai, France, London, Luxembourg, Leeds, Newcastle, New York, New Orleans, New Zealand, Perth, Philadelphia, Queensland, San Francisco, Southern California, South Australia, Sunderland, Sydney, Texas, Toronto and many more centres who take part in the qualifying rounds.
The contest, which is broadcast over two nights by RTÉ was hosted in 2010 by Dáithí Ó Sé.   It was previously presented for over twenty years by Gay Byrne. Other previous presenters include Ray D’Arcy (2005–09), Ryan Tubridy, Marty Whelan and Derek Davis. The first presenter of The Rose of Tralee (prior to it being televised) was Kevin Hilton.
The festival has had financial difficulties in recent years, however the number of people who view the live broadcast of the program remains high.
In 2008 unmarried mothers were allowed to enter the contest for the first time.
The Channel 4 comedy Father Ted parodied the festival in the episode “Rock-a-Hula Ted” where the eponymous character is asked to host the local “Lovely Girls” competition.   Will Scally produced and directed a Channel Four documentary called Rose of Tralee. 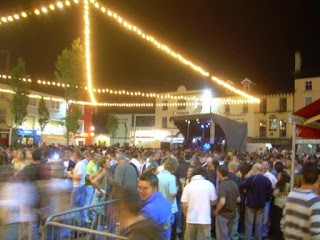 To celebrate the 50th anniversary of the festival in 2009, 50 roses took part in the 2009 competition rather than the approximately 30 who take part every other year.
Michele McCormack (1985 Chicago Rose) has gone on to win an Edward R. Murrow Award in her chosen profession of broadcast journalism. She hosts selection contests both in Philadelphia and the Midwest. (She credits her interview technique to Gay Byrne, who hosted the contest when she was in Tralee.) Other notable roses include Aoife Mulholland of Galway (2003) who went on to achieve acclaim as an actor. Sinéad De Roiste was the first “African Irish American”, as she called herself, representing Philadelphia (2003). Noreen M. Culhane (New York Rose 1970) now Executive Vice President of the New York Stock Exchange.